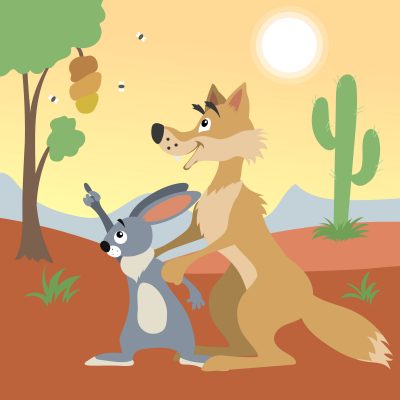 A fun folktale about crafty coyote who tries to trick Hare. He discovers Hare is much more cunning and clever than he thought.  Great story about this American animal, the coyote, to celebrate American Independence Day.  (duration 10 minutes) An episode from storytelling podcast, Journey with Story.

If your little listener wants to ask a question or share a drawing inspired by one of our episodes, please connect with us on Instagram@journeywithstory.  Or at www.kathleenpelley.com.  We love hearing from our listeners!

Did you know Kathleen is also a children’s picture book author? You can find out more about her books here.

And you can buy her latest book, Five Little Angels here.

Can you think of three animals that are distinctively American – that people would connect to America?

You might have said – the bald eagle, or bison, or elk, or the bear, or….some of you might have said a COYOTE.  I had never seen a coyote until I came to America.  So, since we celebrate American Independence Day here on July 4th, today’s story is about a very American animal – the coyote.  And just as you have heard of the African trickster, Anansi, who mainly shows up as a spider, in American folklore, it is the coyote who is shown as a trickster.  In this tale we hear how Coyote tries to trick Hare, only to learn that Hare is much more cunning than he thought.

Huge congratulations to our ten lucky winners of my latest picture book, Five Little Angels.  You can see the list on our IG at journeywithstory, and not to worry if you did not win, we will be holding another contest soon, so check episode notes for details.

Oh, and this episode is dedicated to all the students of Ms. Vanessa Queme’s class at ASA school in Guatemala – who invited me to do a special Zoom presentation for them about the power of stories in our lives.  Thanks to all of you wonderful boys and girls for your great questions and insights around reading and writing and telling stories.

One day after Hare finished a marvelous meal, he sprawled out on the ground, basking in the warm sunshine, and closed his eyes.  Soon he fell fast asleep.

While Hare was snoring contentedly, along came Coyote, who smacked his lips and grinned to see sleeping Hare. What a fine feast he would make, and with one leap, he sprung up and landed plop on Hare’s back.

But Hare was a quick thinker, “Yes,” he answered, looking innocently up into Coyote’s eyes. “Yes, I’m nice and full, and I don’t mind if you eat me. After all, I’m only a wrinkled, tired, scrawny, measly, dry old hare. Besides, I’m sure I don’t have much longer to live.”

Hare sighed sadly, and then clasped his paws together in prayer. “Just one favor, Coyote. Please let me live long enough to ring the school bell today.”

“What are you talking about?” Even though, Coyote was wily, he was still easily confused.

“Well,” said Hare, eyeing the tree above them, “you see, the sweet, young, juicy hares are all in school today, and it’s my job to ring the bell when the school day is done. When I ring the bell, they know it’s time to hop right home, so if you’ll let me live just long enough to ring the bell, I’ll have finished all I have to do in this world.”

Coyote cocked his head. This sounded interesting. “When you ring the bell,” he asked, “what exactly happens?” He longed to know where all those tender young hares might go after old Hare rang the bell.

“They’ll come running past here, of course,” Hare said. “But you see, Coyote, I must wait until just the right time. The hares mustn’t leave school until the sun reaches the top of this tree.” He pointed up, right to the top of the high

He pointed up, right to the top of the highest branches above, where there was a big hornets’ nest hidden among the leaves.

“Oh no, we can’t do that,” Hare said. “I only hope I will be able to climb to the bell when the time comes. You see, it’s up there, at the top of this tree.”

Coyote looked up, and his stomach began to rumble and growl. “You said those little hares were nice and tender?”

“The sweetest, juiciest things you’ve ever seen,” Hare said. “How tasty they would be for someone like you. Luckily they’re safe in school and won’t come out until I ring the bell. Otherwise you might try to eat them.”

“Oh, not me,” Coyote said. “I respect little ones. But Brother Hare, you must be feeling terribly stiff. Why don’t I let you up to stretch a while?”

Hare grinned. “Now that would be so nice of you, Coyote. I won’t go away, of course. I must stay here until it’s time to ring the bell.”

“Of course.” Coyote smiled, and he stood up and set Hare free.

Hare stretched and sighed, and as he did, Coyote began to imagine all those tender young hares.

“You know,” Coyote said, “if you’d like to run around a while, I could stay and ring the bell for you.”

“How nice it would be to have one last run,” Hare said, “but of course you’ll have to promise you won’t ring the bell until the sun has reached the top of that tree.”

Coyote nodded. “No problem,” he said.

“It’s a very simple job, really,” Hare said. “All you have to do is shake the bell, but you must shake it hard to make sure the little hares can hear it.”

“I can do that!” Coyote said proudly. “You just go run along.”

And that’s exactly what Hare did. He ran away as fast as he could, and when he was safely atop a nearby pile of rocks, he turned and called, “Don’t forget to ring that bell, Coyote.”

As soon as Hare was out of sight, Coyote rushed to the tree and began to shake it with all of his might. Alas, he heard no ringing bell, and so he shook it still harder. He shook and shook it until, at last, the hornets’ nest fell from the tree and landed right at his feet.

The moment that happened, the air was filled with furious hornets, and when they saw the creature who had ruined their slumber, they flew at him, stinging and biting him and chasing him across the desert.

Coyote ran as fast as he could, howling and yelping and calling Hare all sorts of nasty names, and he vowed he would never again let that sly creature outwit him. Oh no, not wily Coyote. He would find that Hare and catch him, and never again would believe a word of Hare’s tales.

So, what do you think – was it wrong of Hare to make up a tale about the bell to trick coyote?  Of do you think it was okay for him to do that in order to save himself from being eaten up?

Have you ever had to make up a tale- some sort of story in order to save yourself from something bad happening to you?  That might make a good story – you could try writing it or just telling it or even just drawing a picture of it.

Thanks to all of our patreon subscribers – your support means the world to us –hope you are enjoying all your free weekly coloring sheets.  If you want some coloring sheets for our episodes, just go to www.journeywithstory.com and download some today.

And don’t forget, mums and dads, if you are enjoying our podcast do take a moment to rate, review and share with others.