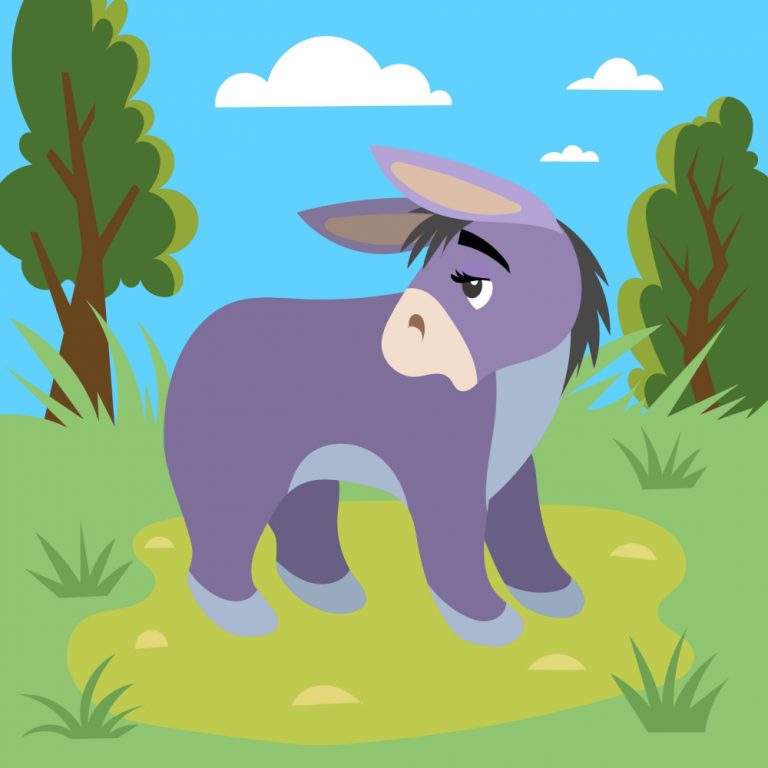 When Eeyore discovers his tail is missing, he has to hunt it down and discovers it in a most surprising place.  A beloved classic from A. A. Milne.  (duration 10 minutes) An episode from Journey with Story, a storytelling podcast for kids ages 4-10.

Where is Eeyore’s Tail? Listen to this Classic Tale from A. A. Milne and Find Out

If you were to lose something that was very, very important to you, what would you do to try and get it back?  Has that ever actually happened to you – that you lost something and then were able to get it back?  How did you do that?

Hello everyone. I’m Kathleen Pelley.  Welcome to Journey with Story.  Today’s episode is about a donkey called Eeyore who loses – his tail of all things!  I am sure many of you are familiar with Eeyore who is one of the characters in the famous  story of Winnie the Pooh by A. A. Milne and so this is one of the chapters from that book.

Before we begin- don’t forget to send us your drawings inspired by our episodes and do please keep rating, reviewing and sharing this podcast with others.  Thanks again to all of our loyal patreon subscribers –hope you are enjoying our weekly coloring sheets.

Now let’s take a journey with Eeyore Loses a Tail by A. A. Milne

The Old Grey Donkey, Eeyore, stood by himself in a thistly corner of

the forest, his front feet well apart, his head on one side, and thought

about things. Sometimes he thought sadly to himself, “Why?” and

as which?”–and sometimes he didn’t quite know what he _was_ thinking

about. So when Winnie-the-Pooh came stumping along, Eeyore was very glad

to be able to stop thinking for a little, in order to say “How do you

do?” in a gloomy manner to him.

“And how are you?” said Winnie-the-Pooh.

Eeyore shook his head from side to side.

So Eeyore stood there, gazing sadly at the ground, and Winnie-the-Pooh

walked all round him once.

“Why, what’s happened to your tail?” he said in surprise.

“What _has_ happened to it?” said Eeyore.

“Well, either a tail _is_ there or it isn’t there. You can’t make a

mistake about it. And yours _isn’t_ there!”

“Let’s have a look,” said Eeyore, and he turned slowly round to the

place where his tail had been a little while ago, and then, finding that

he couldn’t catch it up, he turned round the other way, until he came

back to where he was at first, and then he put his head down and looked

between his front legs, and at last he said, with a long, sad sigh, “I

“That Accounts for a Good Deal,” said Eeyore gloomily. “It Explains

“You must have left it somewhere,” said Winnie-the-Pooh.

“Somebody must have taken it,” said Eeyore. “How Like Them,” he added,

after a long silence.

Pooh felt that he ought to say something helpful about it, but didn’t

quite know what. So he decided to do something helpful instead.

“Eeyore,” he said solemnly, “I, Winnie-the-Pooh, will find your tail for

So Winnie-the-Pooh went off to find Eeyore’s tail.

It was a fine spring morning in the forest as he started out. Little

soft clouds played happily in a blue sky, skipping from time to time in

front of the sun as if they had come to put it out, and then sliding

away suddenly so that the next might have his turn. Through them and

between them the sun shone bravely; and a copse which had worn its firs

which the beeches had put on so prettily. Through copse and spinney

marched Bear; down open slopes of gorse and heather, over rocky beds of

streams, up steep banks of sandstone into the heather again; and so at

last, tired and hungry, to the Hundred Acre Wood. For it was in the

“And if anyone knows anything about anything,” said Bear to himself,

“it’s Owl who knows something about something,” he said, “or my name’s

Owl lived at The Chestnuts, an old-world residence of great charm, which

was grander than anybody else’s, or seemed so to Bear, because it had

both a knocker _and_ a bell-pull. Underneath the knocker there was a

Underneath the bell-pull there was a notice which said:

These notices had been written by Christopher Robin, who was the only

one in the forest who could spell; for Owl, wise though he was in many

ways, able to read and write and spell his own name WOL, yet somehow

went all to pieces over delicate words like MEASLES and BUTTEREDTOAST.

right, and afterwards, in case he had missed some of it, from right to

left. Then, to make quite sure, he knocked and pulled the knocker, and

he pulled and knocked the bell-rope, and he called out in a very loud

voice, “Owl! I require an answer! It’s Bear speaking.” And the door

opened, and Owl looked out.

“Terrible and Sad,” said Pooh, “because Eeyore, who is a friend of mine,

has lost his tail. And he’s Moping about it. So could you very kindly

tell me how to find it for him?”

“Well,” said Owl, “the customary procedure in such cases is as follows.”

“What does Crustimoney Proseedcake mean?” said Pooh. “For I am a Bear of

“It means the Thing to Do.”

“As long as it means that, I don’t mind,” said Pooh humbly.

“The thing to do is as follows. First, Issue a Reward. Then—-“

this–what you were saying? You sneezed just as you were going to tell

“Excuse me, Pooh, I didn’t. You can’t sneeze without knowing it.”

“Well, you can’t know it without something having been sneezed.”

“A Reward!” said Owl very loudly. “We write a notice to say that we will

give a large something to anybody who finds Eeyore’s tail.”

“I see, I see,” said Pooh, nodding his head. “Talking about large

somethings,” he went on dreamily, “I generally have a small something

about now–about this time in the morning,” and he looked wistfully at

the cupboard in the corner of Owl’s parlour; “just a mouthful of

condensed milk or whatnot, with perhaps a lick of honey—-“

“Well, then,” said Owl, “we write out this notice, and we put it up all

“A lick of honey,” murmured Bear to himself, “or–or not, as the case

may be.” And he gave a deep sigh, and tried very hard to listen to what

But Owl went on and on, using longer and longer words, until at last he

came back to where he started, and he explained that the person to write

out this notice was Christopher Robin.

“It was he who wrote the ones on my front door for me. Did you see them,

For some time now Pooh had been saying “Yes” and “No” in turn, with his

eyes shut, to all that Owl was saying, and having said, “Yes, yes,” last

time, he said “No, not at all,” now, without really knowing what Owl was

“Didn’t you see them?” said Owl, a little surprised. “Come and look at

So they went outside. And Pooh looked at the knocker and the notice

the more he looked at the bell-rope, the more he felt that he had seen

“It reminds me of something,” he said, “but I can’t think what. Where

“I just came across it in the Forest. It was hanging over a bush, and I

thought at first somebody lived there, so I rang it, and nothing

happened, and then I rang it again very loudly, and it came off in my

hand, and as nobody seemed to want it, I took it home, and—-“

“Owl,” said Pooh solemnly, “you made a mistake. Somebody did want it.”

“Eeyore. My dear friend Eeyore. He was–he was fond of it.”

“Attached to it,” said Winnie-the-Pooh sadly.

So with these words he unhooked it, and carried it back to Eeyore; and

when Christopher Robin had nailed it on in its right place again, Eeyore

frisked about the forest, waving his tail so happily that

Winnie-the-Pooh came over all funny, and had to hurry home for a little

snack of something to sustain him. And, wiping his mouth half an hour

afterwards, he sang to himself proudly:

_Who found the Tail?_

“At a quarter to two

(Only it was quarter to eleven really),

So glad that poor Eeyore got his tail back –would be dreadful for an animal to lose his tail.  I wonder what is something that you would miss the most if you were to lose it?  Maybe you could write your own story about someone who loses something and how he or she finds it again.  And remember keep sending us your drawings and reviews so we can share with others.