Gopal and the Straw Roof E131 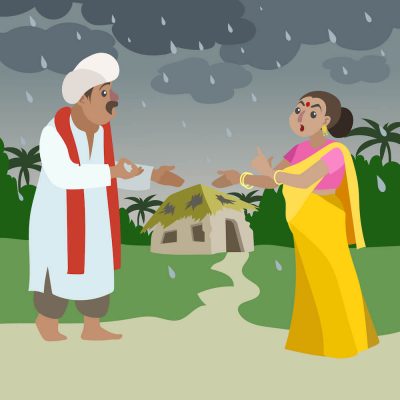 Celebrate April Fools Day with this Fun Folktale from India.

A fun, folktale from India about the King’s jester (fool) who tricks his king into mending his leaky, straw roof.  Perfect for April Fool’s Day!  (duration – 10 minutes)  An episode from Journey with Story, a storytelling podcast for kids.

Have you ever played a trick on someone?  Has someone ever played some kind of prank on you? As you know, we begin this month with April Fool’s Day – a day when there are a lot of people playing tricks and trying to make a fool of their friends or family.

Hello everyone, I’m Kathleen Pelley.  Welcome to Journey with Story. Well, I am not going to play any tricks on you this April Fools Day, but I am going to tell you a story from India about a jester or another name for a jester was a Fool.  I wonder do you know who a jester was?  What was his job? Yes – long ago, in the middle ages, when this April Fool’s Day first began, kings kept jesters whose job was to entertain and amuse and distract them from all the hard work of running the kingdom.

Now…Since this is a tale from India, the other name they used in India long ago for a king is Maharaja –

And there is a special Indian holiday mentioned in this story called  Kartik Puja – where the people perform certain prayers and rituals and prepare a festive meal.

Let’s take a journey with Gopal and the Straw Roof

Long, long ago, in India, there lived a jester called Gopal.  In those days, the Maharaja had many jesters in his court as he had a lot of difficult problems to solve, and so he needed jesters to keep him amused with jokes and pranks and other distractions. Sometimes, he even depended upon his jesters to give him advice and help him solve problems. But of all his jesters, Gopal was the king’s favorite, for not only was he clever and funny with a sharp wit, he also had a kind heart and was always ready to help all his friends and neighbors, as well as the king himself.

Now, one winter morning, Gopal sat inside his hut, shivering with cold and staring up at his flimsy straw roof.  Today it was sure to rain, and if it rained hard enough, then that roof was bound to leak.

“Yes, I know,” said Gopal with a sigh.  “ I know the straw is thin in places.  We will need to replace it with a mound of fresh hay.”

“Don’t you feel ashamed that you have to attend to roofs even now… after all these years?” his wife continued to scold.

“Straw roofs have to be re-done from time to time. What’s shameful about it?” asked Gopal.

“But it is such a disgrace, such an embarrassment that we only have a straw roof for shelter,” snapped his wife.

“There is no shame in living in the house of our ancestors,” replied Gopal.

“It’s no use arguing with you.  I see that I’m doomed to live in a straw hut all my life,” said his wife as she flounced off in disgust.

But left alone with his thoughts, as he felt the slow drip of rain falling through the roof now and plopping onto the ground where he sat, Gopal began to think…. maybe there is something in what my wife says. That was when he devised his clever plan.

The next morning Gopal arrived quite late at the king’s court, and again on the next morning and the next.  Morning after morning, he arrived later and later at the court.

“What’s the matter with you, Gopal?” the king demanded. “You always come late these days.”

“I am planning to have kartik puja at my place this year,” said Gopal.

“But you have it every year.  Why should that cause you to be late?

“Well, it will be special this time,” said Gopal, “I am planning to invite your majesty that evening.”

When the day of Kartik Puja arrived, Gopal’s wife was distraught when she heard that the king himself would be their guest.

“But where is he going to sit? We don’t have a seat that is high enough for him!” she said, “You leave the seating arrangements to me,” said Gopal.  “Where is the ladder?”

“What on earth do you need the ladder for? Govinda borrowed it yesterday,” said Gopal’s wife.

Govinda was Gopal’s next-door neighbor. Gopal shot across to his house to retrieve it.

But when he arrived home, his wife was screaming, “My best mattress is gone! It’s not on my bed any more.”

“Don’t shout your head off, woman. I’ve taken it!”

“But why? Are you quite crazy? First the ladder and now my mattress!”

But Gopal paid her no heed and set about finishing all the preparations for their royal guest.

Before long, came the sound of galloping horses.  The king’s carriage rolled into the small lane outside and Gopal immediately ran to the door to greet the king.

But instead of asking the royal party to step inside the courtyard as usual Gopal led them to the back of the house.

“Where are you taking us, Gopal?” asked the king in surprise. “This isn’t the way to your house! Don’t you usually feed people in your courtyard?”

“Of course not!” said Gopal, “I don’t have a seat that’s high enough for you in my house. I can’t insult your majesty just because you have agreed to come. I have arranged for you to sit on my terrace – at least it’s a place as high you’re used to.”

To the maharaja’s utter astonishment, Gopal pointed to the sloping straw roof of his house. There was a mattress on it, hanging at a precarious angle.

A ladder stood propped against the wall, barely touching the roof.

“There, your majesty,” said Gopal in a humble voice, “A seat high enough, in keeping with your status.”

“Are you off your head, Gopal?” shouted the maharaja, “How can anyone sit on that sloping straw roof?”

“But Sire, I am not asking you to sit on the straw. I have spread a mattress for you to sit on,” said Gopal, “It’s quite easy to climb up this ladder. Only a few rungs are missing.”

“You must be crazy if you expect me to go up that broken ladder and sit on your straw roof,” cried the maharaja, “I never heard of such cheek!”

“It is not cheek, Sire,” said Gopal, “It’s the best I can do. How else can I entertain you in a mud house?”

The maharaja looked at Gopal, his ladder and the mattress hanging down. He burst out laughing. “I get your point,” he said at last, “I’ll send my masons first thing tomorrow morning.

They will convert your thatched hut into a fine brick house – a two-storeyed one! Satisfied?”

Gopal bowed low with folded hands, well pleased with himself.

Now was it any wonder that he remained the King’s favorite jester for all of his days.

So – Gopal really did FOOL the king, didn’t he?

Cheerio then, have a fun April Fool’s Day and join me next time for Journey with Story.