How Kangaroo Got Its Pouch: E123 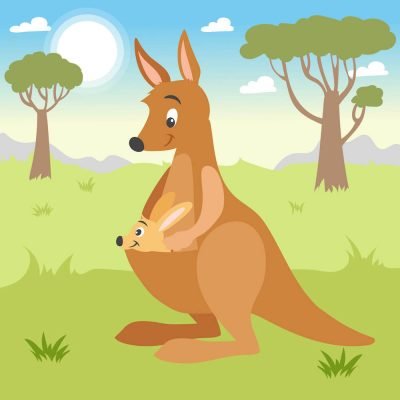 When Kangaroo proves she has the kindest heart of all the creatures, Byamee, the sky god rewards her by giving her a pouch to carry her joey. An Australian folktale that celebrates kindness for ages 4-8.

Hello everyone, I’m Kathleen Pelley – welcome to Journey with Story.  Today’s episode is dedicated to all of our wonderful loyal fans in Australia!  We get many, many, many lovely messages and drawing from our Australian listeners, and so we want you to know how much we appreciate all of your support and encouragement – thank you, thank you, thank you.

So, since this episode is for our Australian listeners, it makes sense that it is a story from Australia, about this animal called a kangaroo, because of course kangaroos live in Australia.  The babies are called joeys and the mamas carry their babies in a…yes in a pouch.  We call animals that have pouches marsupials.

Let’s take a journey with How Kangaroo Got Its Pouch

Long ago the kangaroo was grooming her joey on the bank of a brook. They liked to listen to the water burble as the mama combed her baby’s fur. On this day, an old wombat staggered toward them.

“Oh dear,” the kangaroo whispered to her baby. “This wombat is old and sick. He is so old, he must have great-great-grandchildren already.”

The mother kangaroo thought she heard the sound of weeping. As the wombat stumbled closer, she heard him say, “Useless and worthless, worthless and useless.”

“I did,” said the kangaroo. “A kangaroo and her joey.”

“I’m blind,” the wombat replied. “Nobody wants me around. Nobody thinks about me. I’m no good any more. They’ve abandoned me, all of them.”

The kangaroo, who had a tender heart, said, “It’s not as bad as all that. I’ll be your friend. My joey and I will show you where the tastiest grass grows.” She let the wombat hold her tail. Then, slowly, she led him over to the juiciest grass and cleanest water. The old wombat sighed with pleasure. It made the kangaroo happy to see him feeling better.

Suddenly she remembered her joey! She had told him to stay close, but he had wandered off again. She raced back to look for him. So many times this had happened. She’d look for food, and when she looked up, he had wandered off. It scared her terribly.

Finally she found her joey asleep under a gum tree. Not wanting to wake him from his nap, she decided to go back and check on the old wombat.

Something was moving in the bush- it was a hunter, silently stalking the wombat! Already his boomerang was raised above his head, its smooth edges ready to slice the air. The kangaroo froze. She couldn’t even breathe. She wanted to run, but the wombat was like her joey—she had to protect him!

The kangaroo began to stomp on the branches and twigs under her feet. Thump, thump, crack, crack, she pounded the earth. The hunter turned toward her. “Run,” she screamed to the wombat, “Run, there’s a hunter.” The wombat rushed off not knowing where he was going.  Now all the hunter wanted was the kangaroo!

As fast and as hard as she could, the kangaroo hopped off into the bush, in the other direction from where she had left her joey sleeping.  At last she came to a cave.

She was too tired to go farther, and collapsed on the dirt floor inside. At least the hunter would have to kill her in the cool dark, not out in the open where other animals would be forced to watch.

But the hunter ran right past the mouth of the cave! He had not seen her. The kangaroo stayed still waiting and listening for his return. She dared not leave her hiding spot yet.  Soon, she spotted the hunter walking back past the mouth of the cave again, his boomerang hanging from his hand.  She waited a little longer to be certain her path was clear, and then she raced as fast as she could back to the gum tree.

And there was her darling joey – wide-awake and all ready to play.  Together they went off in search of old wombat, but search as they might, there was no sign of him.

Now what the kangaroo mama did not know was that the wombat was actually not a wombat at all.  He was the great god Byamee who had put on a disguise, because he wanted to come down to earth and find out which of his creatures had the kindest heart.

Now he had an answer that pleased him greatly: the kangaroo had the kindest heart of all his creatures.  So Byamee wanted to give her the gift – a special gift that would be particularly helpful to her and her needs.

Byamee called the sky spirits together and said, “Go down below to where the eucalyptus grow tall. Peel the long strips of bark and make a dilly bag apron. Give it to the kangaroo mother and explain that she must tie it around her waist.”

And so they did. At the very moment the kangaroo mother tied the apron around her waist, Byamee transformed it into soft kangaroo fur. It grew into her own flesh. Now she had a pouch in which to carry her baby joey. He could even sleep in there as she went about her daily tasks.

Byamee loved the kangaroo’s generous heart. So he decided to make pouches for all the other marsupial mothers. Ever since then, their babies almost never get lost.

Don’t forget if you sign up to my email list to get all kinds of updates about this podcast and my upcoming books and other bits and bobs around the wonderful world of stories, you can download our very popular Five Favorite Fairytales Coloring sheets.  Just sign up at www.journeywithstory.com