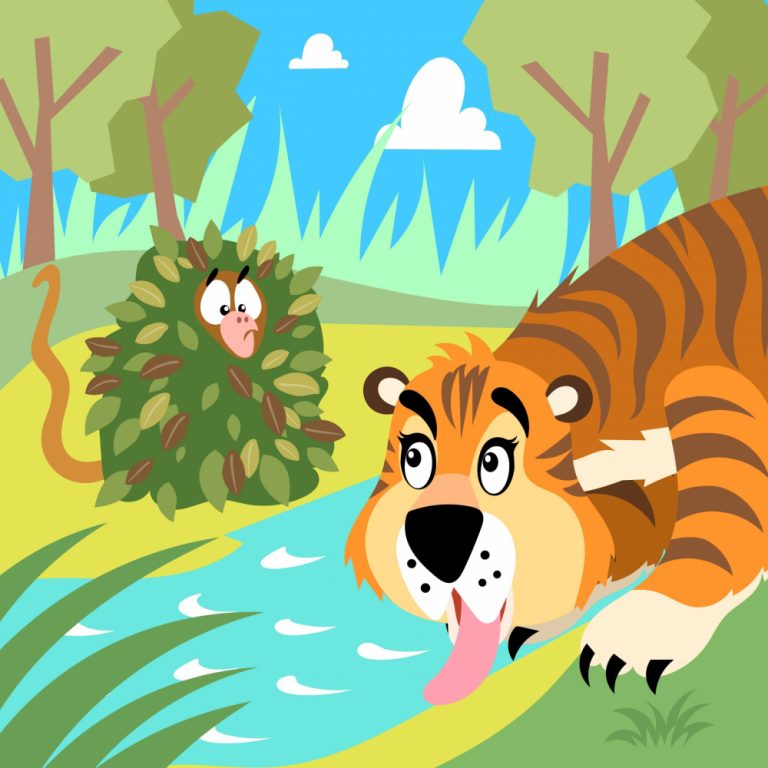 How Monkey Got a Drink When He Was Thirsty:E209

A funny folktale from Brazil about a clever little monkey who tricks a fierce tiger by disguising himself in a most unusual way so that the can go and drink safely by the river alongside the tiger.  (duration 11 minutes)  An episode from Journey with Story, a storytelling podcast for kids ages 3-10.


How Monkey Got a Drink When he Was Thirsty

Hello everyone.  I’m Kathleen Pelley. Welcome to Journey with Story.  Well, the word I was thinking of is…resourceful.  It is a very good quality to have, and today’s episode is about a very resourceful monkey who has to find a way to get water without being caught by the tiger.

Let’s see how he does that.

But before we begin- huge thanks to all of you who have been rating, reviewing and sharing this podcast with others.  We really appreciate your support and if you haven’t already done so, please take a moment to do that now wherever you listen to this podcast.

Now let’s take a journey with How the Monkey got a Drink when He was Thirsty- a folktale from Brazil.

Once upon a time the monkey made the tiger very angry. This is how it happened. The monkey was seated high up among the leafy branches of a mango tree playing upon his guitar. The tiger passed that way and lay down under the tree to rest. Just to tease him, the monkey played and sang this little song:

The tiger was very angry. “Just wait until I catch you, Mr. Monkey,” he said. “Then I’ll show you a trick or two with bones.”

The monkey leaped from one tree to another keeping himself so well hid by the foliage that the tiger could not see him. Then he came down out of the trees and hid himself in a hole in the ground. When the tiger came near he again played and sang his little song:

The tiger put his paw into the hole and caught the monkey’s leg. “Oh, ho, Mr. Tiger!” said the monkey. “You think that you have caught my leg but what you really have is just a little stick. Oh, ho! Oh, ho!” Then the tiger let go of the monkey’s leg.

The monkey crawled farther back into the hole in the ground where the tiger’s paw could not reach him. Then he said: “Thank you so much, Mr. Tiger, for letting go of my leg. It really was my leg, you know.” Again he played and sang his little song:

The tiger was angrier than ever. He waited and waited for the monkey to come out of the hole in the ground but the monkey did not come. He had discovered another way out and once more from the high tree tops he sang down to the waiting tiger:

There had been a great drought in the land and there was only one watering place where the beasts could drink. The tiger knew that the monkey would have to go there when he was thirsty so he decided to wait for him and catch him when he came to drink.

When the monkey went to the watering place to get a drink, he found the tiger there waiting for him. He ran away as fast as the wind for he was really very much afraid of the tiger.

He waited and waited until he thought he should die of thirst, but the tiger did not go away from the watering place for a single minute. At last the monkey thought of a trick by which he would be able to get a drink.

He lay down by the side of the pathway as if he were dead. After a while an old woman came along the path carrying a dish of honey in a basket upon her head. She saw the monkey lying there by the path and, thinking that he was dead, she picked him up and put him into the basket with the dish of honey. When the monkey saw that it was honey in the dish he was very happy. He opened the dish and covered himself all over with the soft sticky honey. Then as the old woman walked under the trees he lightly sprang out of the basket into the trees.

The old woman did not miss him until she got home and found only part of her dish of honey in the basket. “Why, I thought I had brought home a dead monkey in my basket,” she said to her children. “Now there is no monkey here and my dish is only half full of honey. The monkey must have been playing one of his tricks.”

The monkey had, in the meantime, stuck leaves from the trees into the honey all over his body so that he was completely disguised. His own mother would never have recognised him. He looked something like a porcupine; but instead of sharp quills there were green leaves sticking out all over him.

The tiger saw him, but as the tiger expected to see the leaves come off just as soon as the monkey got into the water, he thought he would wait and catch him in his bare skin. This time the leaves did not come off, for the resin held them fast and was not in the least affected by the water. The tiger thought that it was not the monkey and that he must have made a mistake.

The monkey drank all he wished and then strolled away leisurely without the tiger’s attacking him. He used the resin and leaves every time he wanted a drink after that. He kept up the trick until the rainy season arrived and he could find plenty of water in other places than the big drinking place.

Do you see what I mean about this monkey being very resourceful?  He was very clever to think of disguising himself so the tiger would not recognize him. Although, I don’t know about you, but my idea of a disguise would be to put on a pair of sunglasses along with a funny wig and a hat – think that would be a bit easier than spreading honey all over your skin!

What do you think this story’s souvenir is – the little nugget of truth about what it means to live in this world.  Yes, I think it has to do with – when there is a problem, if you use all your wits and strength, then you can usually find some way of solving that problem – you can be resourceful!

I wonder how you will be resourceful the next time you encounter a problem?

Cheerio then, join me next time for Journey with Story