How the Rhinoceros Got His Skin: Bonus Episode 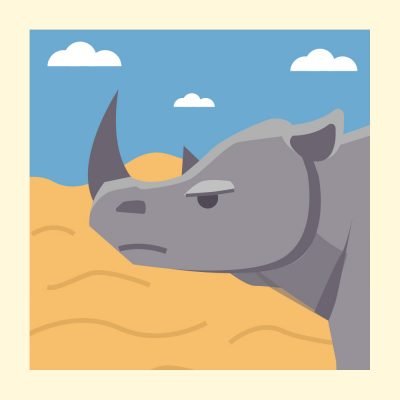 A beloved classic tale from Rudyard Kipling that tells us how the rhinoceros got such wrinkly skin.  (duration 11 minutes) A BONUS episode from Journey with Story, a storytelling podcast for kids.

Have you ever wondered about certain things in the world?  Like – why is the sky is blue….or  which came first – the chicken or the egg…. or where do unicorns live….or why does the rhinoceros have such wrinkly skin – if you haven’t seen a picture of a rhinoceros – get a grown up to show you a picture right now and you will see what I mean – right?  REALLY REALLY wrinkly!

Hello everyone I’m Kathleen Pelley.  Welcome to another special bonus episode of JWS.  I know it is hard right now for so many of us feeling a bit discombobulated  – and so in these discombobulating times (by the way if you missed my other bonus episodes you might not know the meaning of this splendid sounding word….so go back now and listen to my first bonus episode to discover its meaning) so as I was saying – in these days of discombobulation – stories are a great way to cheer us up and connect us to one another.  Today’s tale tells us how the rhinoceros got his wrinkly skin.  It is a very famous story written a long time ago by Rudyard Kipling.

A few words you may not know…a man called a Parsee – just means he came originally from a country called Persia and then went to live in India.

Comestible – is a piece of food – something to eat

And Sloka – is a type of a poem

There may also be some other unfamiliar words, but you will be able to guess most of them from the story and there are some place names too that will be new to you – but they are super sounding words – so enjoy!

Let’s take a journey with….

How The Rhinoceros Got His Skin by Rudyard Kipling

Once upon a time, on an uninhabited island on the shores of the Red Sea, there lived a Parsee from whose hat the rays of  the sun were reflected in more-than-orien- tal splendour. And the Parsee lived by the Red Sea with nothing but his hat and his knife and a cooking-stove of the kind that you must particularly never touch. And one day he took flour and water and currants  and plums and sugar and things, and made himself one cake, which was two feet across and three feet thick. It was indeed a Supe- rior Comestible (that’s magic), and he put  it on stove because he was allowed to cook on the stove, and he baked it and he baked  it till it was all done brown and smelt most sentimental. But just as he was going to eat it there came down to the beach from the Alto- gether Uninhabited Interior one Rhinoceros with a horn on his nose, two piggy eyes, and few manners. In those days the Rhinoceros’s skin fitted him quite tight. There were no wrinkles in it anywhere. He looked exactly like a Noah’s Ark Rhinoceros, but of course much bigger. All the same, he had no man- ners then, and he has no manners now, and he never will have any manners. He said, ‘How!’ and the Parsee left that cake and climbed to the top of a palm tree with noth- ing on but his hat, from which the rays of the sun were always reflected in more-than-

oriental splendour. And the Rhinoceros upset the oil-stove with his nose, and the cake rolled on the sand, and he spiked that cake on the horn of his nose, and he ate it, and

he went away, waving his tail, to the desolate and Exclusively Uninhabited Interior which abuts on the islands of Mazanderan, Socotra, and Promontories of the Larger Equinox. Then the Parsee came down from his palm- tree and put the stove on its legs and recited the following Sloka, which, as you have not heard, I will now proceed to relate:

Them that takes cakes Which the Parsee-man bakes Makes dreadful mistakes.

And there was a great deal more in that than you would think.

Because, five weeks later, there was a heat wave in the Red Sea, and everybody took off all the clothes they had. The Parsee took off his hat; but the Rhinoceros took off his skin and carried it over his shoulder as he came down to the beach to bathe. In those days it buttoned underneath with three but- tons and looked like a waterproof. He said nothing whatever about the Parsee’s cake, because he had eaten it all; and he never had any manners, then, since, or henceforward. He waddled straight into the water and blew bubbles through his nose, leaving his skin on the beach.

And the Rhinoceros did. He buttoned it up with the three buttons, and it tickled like cake crumbs in bed. Then he wanted to scratch, but that made it worse; and then he lay down on the sands and rolled and rolled and rolled, and every time he rolled the cake crumbs tickled him worse and worse and worse. Then he ran to the palm-tree  and rubbed and rubbed and rubbed himself against it. He rubbed so much and so hard that he rubbed his skin into a great fold over his shoulders, and another fold underneath, where the buttons used to be (but he rubbed the buttons off), and he rubbed some more folds over his legs. And it spoiled his temper, but it didn’t make the least difference to the cake-crumbs. They were inside his skin and

they tickled. So he went home, very angry indeed and horribly scratchy; and from that day to this every rhinoceros has great folds in his skin and a very bad temper, all on ac- count of the cake-crumbs inside.

But the Parsee came down from his palm-tree, wearing his hat, from which the rays of the sun were reflected in more-than- oriental splendour, packed up his cooking- stove, and went away in the direction of Orotavo, Amygdala, the Upland Meadows of Anantarivo, and the Marshes of Sonaput.

Poor Rhinoceros, must be ever so uncomfortable having cake crumbs under his skin…..sort of like having a permanent pebble in your shoe.  Do you think that he deserved such a punishment?  Or do you think it was a bit too severe? How would you have punished someone who ate YOUR cake, I  wonder?

I bet you could paint some fabulous pictures from this story – don’t forget you can send them to me – just get your mum or dad to take a photo of them and email them to me –Kathleen@kathleenpelley.com  and if you are looking for some more activities to do – you can find a lot on my website www.kathleenpelley.com – go to educators and scroll down for activity guides.

Cheerio then…join me next time for JWS.