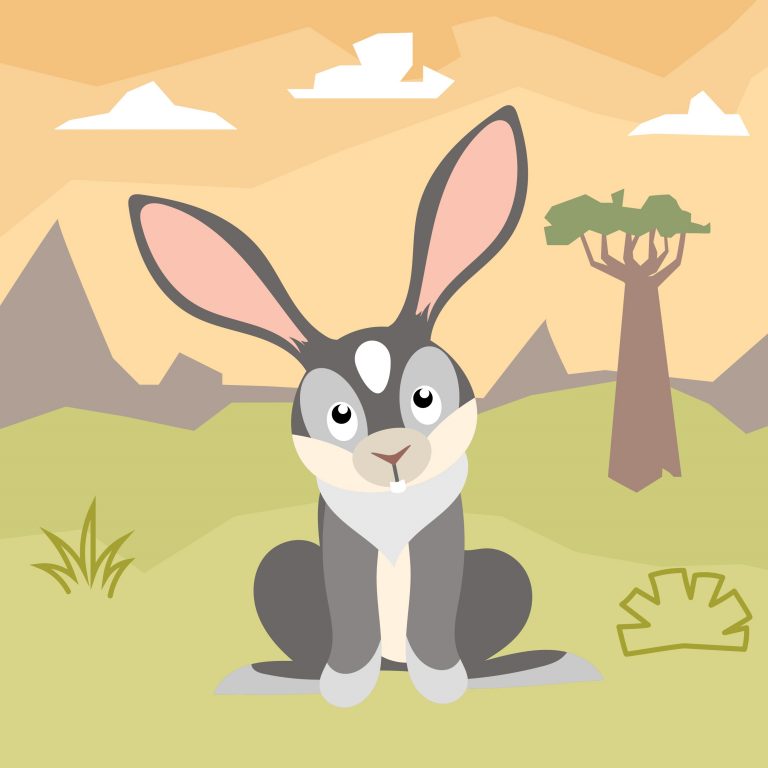 Two African folktales about how the rabbit got his wisdom spot and how the turtle got his shell.  A great way to spark a discussion about all the different ways someone can be clever and what is the difference between cleverness and wisdom.  (duration 16minutes) An episode from storytelling podcast, Journey with Story.

Well  today’s episode is actually two short stories and each of them is about an animal who is very clever indeed when it comes to dealing with other animals.

Oh, before we begin, we have a few announcements….ready?  Gather round….

First – huge congratulations to those of you who entered our contest to win an audible version of my Five Little Angels Book.

Beatrice Marshall whose favorite episode is The Tale of the Linani Beast, although her mum says she actually loves ALL of our episodes and listens to one every night.  Well done, Beatrice.

Then we have Alana and Josephine Melendez whose favorite episodes are Moonflower and The Tale of the Linani Beast.

Followed by Lucas and Sophia and Zach from South Africa.  Their favorite episode is….yes, you guessed it The Tale of the Linani Beast!

And finally, we have Zion whose favorite episode was The Woman who Wanted More Noise.

Congrats to all of our winners, and if you heard your name called and you are wondering where your audio book is, make sure you check your email folder in junk and spam in case it got sent there.

And remember, we love to hear from all of our listeners all year long, so keep sending us your drawings and do let us know your favorite episode so that every now and then we will pick one of you and give you a shout on our show.

Let’s take a journey with Jack Rabbit’s Wisdom Spot and The Turtle’s Shell.

Jack Rabbit was a very wise fellow, but he wanted to be wiser, and so he went to the animal wizard, Muzimu, and begged for more wisdom.

“Great wizard of the woods, please make me wiser,” he said.

“But you are already wise, little fellow,” said Muzimu.

“No, I am not wise enough, Great Wizard.”

“Very well then, bring me a live snake and I will see what I can do for you.”

So the rabbit picked up a long stick and went to the snake’s house, where he found him coiled upon a log.

“What have you there?”

“A stick, which is longer than you are.”

“Well, let us measure and see,” said the cunning rabbit.

So the snake stretched himself along the log and the rabbit put his stick near the snake as if to measure him.  Then, quick as a wink, the rabbit slipped a string around the snake’s neck, holding him fast to the end of the stick.

“Let me go!  Let me go!” cried the snake, who was most surprised and alarmed by the rabbit’s trickery.  He turned and twisted and writhed around the stick trying to escape, but it was no use.

Rabbit raced as fast as he could to Muzimu.  The wizard could barely believe his eyes, when he saw the wriggling snake at the end of the stick.

“How did you catch him alive?” he asked

The rabbit smiled but said not a word.

“Little fellow, since you are clever enough to fool the snake, you have all the sense you need,” declared the wizard.

“No, no, mighty Muzimu, please, give me more sense.”

“Very well, then, if you insist.  Go, now and find me a swarm of bees and bring them to me, then I will give you all the sense you want.”

Again, the little rabbit ran off determined to do as the wizard had asked.   He found a big gourd.  He cut a hole in the bottom, cleaned it out, filled it with honey and tied it to a long pole.    Next he found a bees’ nest and left the gourd nearby.

Soon enough, the bees smelled that honey.  They swarmed around the opening and flew in to taste the sweet food.

As soon as the gourd was full of the buzzing bees, the rabbit filled up the hole and took the gourd to Muzimu singing,

The animal wizard was most surprised and amazed to see that the little rabbit had completed his task.

“Brother Rabbit, you are indeed a wise little creature and you shall become wiser every day because you use your wits.”

And as he said, this he touched the rabbit’s head between the ears,  and at once the hair became white.

“You shall  always wear this white spot as a mark of your wisdom,” he declared.

And so to this very day all jack rabbits wear this white wisdom spot between their ears.

Long long ago when the world was still quite new, the kangaroo and the turtle were feasting in the hornbill’s garden.  The kangaroo trod on the tall stalks of the bananas and the sugar canes, and brought them to the ground, so that his friend the turtle could reach them.

Now the hornbill is a very large bird.  He has a long, strong bill, on top of which is a large piece of horn that is why he is called hornbill.  He was the king of the birds because he was so large and so strong.

When the birds saw the kangaroo and the turtle in the royal garden, they tried to drive them out. The kangaroo leaped over the  fence and escaped.  But the turtle could not get out and he hid under a yam patch.  But the birds soon found him there. They bound him with cords and took him to their royal master

“Aha wicked turtle!” exclaimed the hornbill. “I have caught you at last.  You and your family have been feasting on my bananas and sugar cane for a long time.  You have robbed my garden  and spoiled it and now I shall punish you.”

The next day the king sent all his servants to gather fruit for the feast that was to celebrate the death of the turtle.  The young birds were left at home to watch the turtle prisoner.

“Dear children,” said the turtle in a gentle voice.  “Let us play a game together.”

“But first,” begged the turtle.  “Cut these cords that bind me.”

The birds could not resist the turtle’s entreaties, and his gentle pleading and so they cut the cords.

“Now let us play a game,” said the turtle as he stretched himself free.

“What shall we play?”  asked the birds

“Let us play that I am king and you are my subjects.  Go and gather all your father’s ornaments and decorate me.  Bring only the best and the finest ones.”

At once the birds flew off to do the turtle’s bidding. They brought him all of their father’s most ornate shell decorations.  The turtle took a long shell necklace and wound it around his neck many times. Then he took a shell armlet and put one each of his front feet, and on his back, he placed a heavy bowl.

“What a fine king I am,” he boasted.  Look at all  my beautiful ornaments..”  The birds bowed low before him, as if he were indeed thier king.

“Now let me go to the tree and back again, “ said the turtle, so you can see how fine I look and admire me.”

“How awkward the old turtle looks,” jeered the birds.

“How strange he looks decorated in father’s ornaments.”   And they laughed with each other as they watched the turtle crawl back and forth.

Just then the turtle heard the king and his servants returning.    He crawled toward the water and dived in quickly.

“Come father, come, “ cried all the little birds.  “The turtle is running away.”

The hornbill and all the birds flew to the water.

“Show yourself, turtle,” they cried.  “Lift up your head.”

The next time he appeared, their stones cut the string of his shell necklace Only the bowl on his back remained and they hurled stone after stone upon it, but every one slipped off into the water and left the bowl unharmed.

Then the turtle swam away and was never seen again by the hornbill.  But from that day to this every turtle carries a shell on his back.

Lots of  questions for you to ponder, I think. That is the marvelous thing  about good stories – they make us think and they help to grow our very own “wisdom spot” Where do you think we humans have our wisdom spot?  Yes, I think we carry a wisdom spot in our hearts- when we grow hearts that are big and kind and bold, that makes us wiser for sure.