January Bonus Round Up 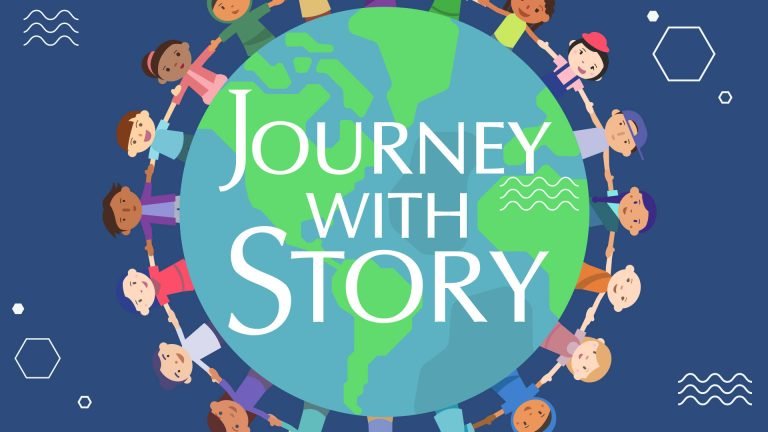 January Bonus Round Up

Enjoy all of our January episodes here in one special Round-Up Playlist.

The Prince with the Enormous Nose

If your little listener wants to ask a question or share a drawing inspired by one of our episodes, please connect with us on Instagram@journeywithstory    Or at www.journeywithstory.com  We love hearing from our listeners!

Hello everyone.  I’m Kathleen Pelley.  Welcome to Journey with Story.  Today’s episode is a Native American Indian tale about a time when the world was  gripped in a freezing winter for three years – with no sun and no heat at all, Brrrrr!  Can you imagine that?  It makes me shiver and shake just to think about it.

Big thanks to all of our listeners who have given us such terrific reviews and ratings – we really appreciate it.  If you haven’t done so already and you are enjoying our podcast, we would love it if you took a minute to rate and review it wherever you listen to your podcasts.  Thanks so much.

Let’s take a journey with The Long Winter Story

Long, long ago, when the world was still young, before any humans walked the land, a long, dark winter gripped the earth.

For three years, the sun disappeared.  Thick clouds hung low and heavy in the dark sky.  Day and night snow fell.  The animals, who lived then in the lower world beneath the ground, grew hungry, cold, and frightened.

So, they called a grand assembly. All the birds of the air, fish of the sea, and creatures with snouts and paws, fangs and tails, gathered together to discuss their predicament.

But when the animals looked around, they noticed something strange – one animal was missing – BEAR.  They talked among themselves and agreed that none of them had seen any bears these past three years since the start of this long dark winter.

Still, no matter how strange, they determined that the most important task before them was not to worry about bear, but rather to worry about heat and how they could bring back heat, otherwise, there would be no end to their suffering.

They chose the fastest and bravest among them to go in search of heat. Lynx, Fox, Wolf, Wolverine, Mouse, Pike, and Dogfish (small shark) set off into the world.

Far and wide they traveled, until at last, one day they found a hidden doorway that opened up into the upper world.

One behind the other, the walked on and on in this new world.  And after some time  they spotted a lake.  By the lake, burned a campfire, and next to it, stood a tipi, and outside the tipi were two bear cubs.

“Where is your mother, little cubs?” asked Wolf

“She is off hunting for food,” answered the littlest cub. “But you can come inside our tipi until she gets back.”

So the animals all crowded into the small tipi, where they noticed a number of big, round bags hanging there.

Fox pointed to the first bag and asked, “Well, what is in this bag?”

“That,” said the bigger cub, “is where our mother keeps the rain.”

“And what is in this one?” Fox asked again, pointing to the second bag.

“That,” the little cub answered, “is the wind.”

“That is where mother keeps the fog.”

“And what may be in this next bag?” asked Fox.

Then the cubs both whispered, “That is the bag where she keeps the heat.”

The animals gasped, hardly able to believe their good fortune in finding HEAT at last.

They looked knowingly at one another and stammered their good-byes.

Outside the tipi, they rushed to a hidden spot and held a quick council. Their first agreement was to move as fast as possible, because they knew the mother bear might return at any time.

So, after finding another spot to hide, the animals pondered how best to capture this bag with the heat.

“I know!” said Lynx. “I’ll change myself into a deer on the other side of the lake.”

“Good idea!” said Wolverine. “The mother bear will see you across the lake and she’ll want to hunt you. She’ll have to paddle her canoe across the lake, and that will give us time to get the bag with the heat.”
“Better yet,” squeaked Mouse, “I’ll chew a deep cut in the bear’s paddle near the blade, so it will take her even longer to canoe across.”

So Lynx went around to the other side of the lake and turned into a deer. Now as a Deer, he wandered near the edge of the lake to attract Bear’s attention. In the meantime, Mouse scrambled into Bear’s canoe and chewed a deep cut in the handle of her paddle close to the blade. The others hid near Bear’s tipi.

When one of the bear cubs saw what he thought was a  deer across the lake he cried out, “Look at the deer on the opposite shore!”

The old mother Bear immediately jumped into her canoe and paddled toward it. Deer walked slowly along the beach pretending not to see the canoe, so as to tempt Bear to paddle up close to him.

Then all at once Deer doubled about and ran the opposite way. Old Bear threw her whole weight on the paddle to make it go faster, and the paddle broke suddenly where Mouse had gnawed it. The force of Bear’s weight threw her into the water. The other animals were watching the hunt from the other side, and as soon as they saw the mother Bear floundering in the water, they ran into the tipi and pulled down the bag containing the heat.

They hurried to get back to the opening as fast as they could, but the bag was very large, and none of them was able to keep up the pace for long. Whenever one tired out, another would take the bag, and in this way they hastened along as quickly as they could, for they knew that the old mother Bear would soon get ashore and return to her tipi, and that when she did she would discover the missing bag. Then she’d be furious and follow their footprints to catch them!

Sure enough, the old mother Bear was soon close on their heels, and had almost overtaken the animals when they spied, finally, just up ahead -the opening to their world below.

By this time the stronger animals were all so tired, they could hardly move at all. Now Dogfish (the small shark) took the bag and pulled it along a good way, and finally Pike (the freshwater fish) managed to inch it along some more.

At that very moment, Bear lurched toward them. All the animals together pushed the bag until it tipped through the hole to the lower world and they each jumped in after it to safety, just in time.

One at a time they tugged the bag through the air into the world from where they had come.

And, as soon as the bag dropped to the world below, it broke and all the heat crammed inside the bag rushed out. Warmth spread at once to all parts of the world and quickly thawed the ice and snow.

Floodwaters ran high for many weeks, but then they gradually subsided.

Now the trees and bushes and flowers that had been covered by ice for so long, sprouted fresh green leavens – spring bloomed and blossomed again.

From that time till now, the world has always seen a warm season returning after a cold one, just as we see it today.

Well, I don’t know about you – but depending on where you live in the world, if you are anything like me, you might be longing for a warm season to return very soon.

And since we are fast approaching the end of this year and the beginning of a new year – or as they call it in my Native Scotland – Hogmany, here is a traditional Scottish Blessing to bring in the New Year

It means -long may your chimney smoke – and hearkens back to the days when people had to light a coal fire in their house for warmth and so when you say lang may her lum reek, you are meaning may you always have some wood or coal to keep a fire in your chimney and warmth in your home.

So, now you can say that with me – Lang may yer lum reek!

Happy New Year to all of our wonderful listeners. 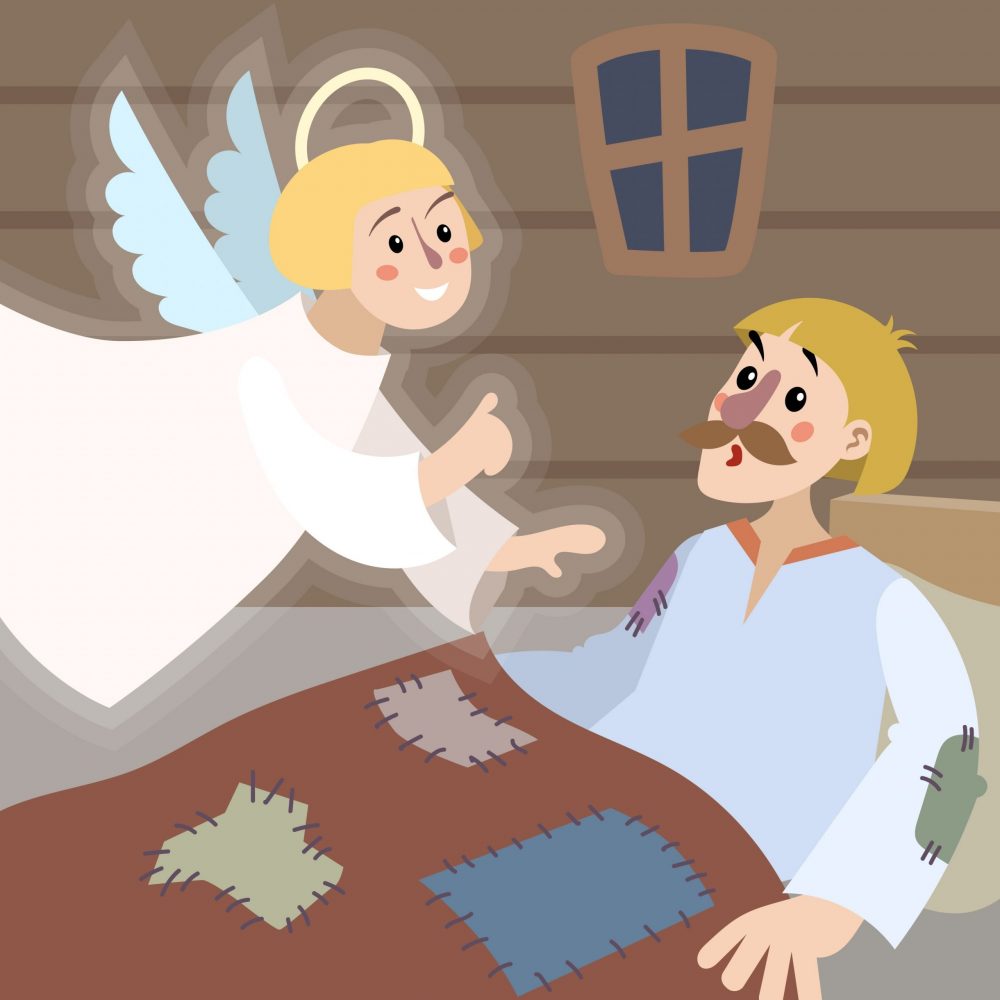 We Are All One: E207 In this Russian folktale an angel gives a poor man a most unusual gift.  A lovely tale to celebrate this season of giving and a