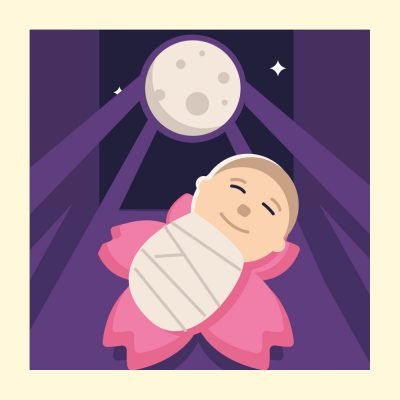 One spring evening, the Moon sends one of her children to a poor childless couple and tells that she will be theirs to look after for 18 years.  A beautiful folktale from Japan that celebrates wisdom, kindness, and goodness.  (duration – 8 minutes) An episode from Journey with Story, a storytelling podcast for kids.

Do you ever look up at the moon when you are in your bed?  Do you like seeing moonbeams spilling across your floor?  If you had to make up a story about the moon – I wonder what would you say.

Hello everyone I’m Kathleen Pelley – Welcome to JWS.  Todays story is an old folktale from Japan and it is all about what happens when the Moon casts its magic on the earth.

Thanks to all of you who have been connecting with me on IG and sending me your marvelous drawings.  Keep them coming to IG at JWS.

And, mums and dads, if you are enjoying this ad free podcast, it would really help us if you would subscribe, rate review and share it with others.  Thanks so much.

Let’s take a journey with Moonflower

Once upon a time, there lived a poor horse farmer and his wife who wished with all their hearts to adopt a child and raise her as their own.  But when they went to the mayor to make their request, he refused them, saying they were too poor and would have nothing to offer any child.  The couple were heartbroken and as time went by their sorrow grew even more.

Then one spring night, they noticed the moon was shining more brightly than usual, pouring into the windows of their little cottage. Suddenly, a moonbeam shone directly through their window onto their dining table. A small dot appeared on the beam, and as the couple watched in astonishment, that dot grew until it was a tiny, silvery horse, as little as a mouse. On his back he carried a flowering cherry branch.

As the couple stared, a deep voice filled the room. “Don’t be sad,” the voice said. “I am the moon, and I am sending you one of my children.”

With those words, one cherry blossom opened its petals, and there sat a tiny baby, as small as the tip of a finger.

“This is Moonflower, and she will be yours to love and raise for 18 years,” the voice said. “When she is 18, she must return to me. Now, lift her from the flower and take good care of her.”

The woman reached out and lifted the tiny baby and placed her on a mat, and Moonflower at once began to grow. Soon she was the size of a human baby, with eyes shining as brightly as stars. She was dressed in a pink kimono embroidered with cherry blossoms, and in her hand she held a magnificent ruby.

The tiny horse turned and raced back up the moonbeam, and the moon said, “Use the years wisely.”

A moment later, the moonbeam disappeared.

The farmer and his wife sold the ruby for a great deal of money, and with this money they fixed their farm and bought more horses, and soon they never had to worry about money again, for they had more than enough now to live well and raise their beautiful Moonflower.

As the years passed, the family’s stables grew. Warriors from everywhere purchased horses from them, for their horses were the finest in the land. As their wealth grew, so did their generosity.

Moonflower grew up to be kind, generous, wise and lovely. Everyone adored her and treated her with great respect. They were grateful she had come to Earth.

But the farmer and his wife could not forget that Moonflower would one day leave them, and she too worried about the day she would have to say goodbye. Moonflower was happy on Earth, and she loved her parents.

One day Moonflower overheard her mother talking to her father. “When Moonflower is gone, my heart will be broken, and the spirits of our ancestors will mourn, for there will be no grandchildren on Earth to remember them.”

Moonflower decided she must find a way to have brothers and sisters, and so she went to see the mayor.

“My parents are the best parents anyone could wish for. I have come to request that you allow them to adopt more children.”

The mayor could not disagree, and when Moonflower told her parents what she had done, they were so touched that they wept.

Over the next few years, they adopted three boys and two girls — children they raised with the same generosity, kindness and love they had always shown Moonflower.

Moonflower loved her brothers and sisters, but the day came when Moonflower turned 18.

Everyone sang and danced and enjoyed the evening.

At midnight, a bright moonbeam suddenly shone into the garden, settling on a flowering cherry tree.

Everyone stared as figures began to float down the beam, each one riding a magnificent, silvery-white horse. The figures were all smiling — the women beautifully dressed in embroidered kimonos and men dressed as warriors. They joined the party, drinking and eating and dancing.

Moonflower smiled again, and so did her mother and father. Although they were sad, now they knew their daughter would be happy; she would find love and companionship on the moon.

Suddenly the voice of the moon spoke again. “Dear friends, you have used the years wisely, and as a reward, I will not take Moonflower away forever. Every year on her birthday, she may come for a visit, and she will bring her husband and her children.”

Everyone was overjoyed, and the celebrating continued till dawn.

As the night faded, the farmer, his wife and their children hugged Moonflower as hard as they could. Then they stood and wept as Moonflower mounted her horse and rode up the moonbeam.

But forever after, on her birthday, Moonflower comes back to Earth to visit, to celebrate and to honor all the generations that came before her and those who came after her.

What do you think this story’s souvenir is?  Its truth about what it means to be human?  Yes, maybe it is simply – you do not need to be rich and prosperous in order to love a child – and maybe too the more you do love, the more there is to love.  I wonder now if some of you might try to write your own magical story about the moon?