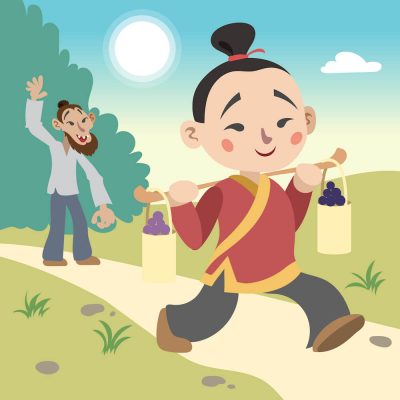 Big thanks to all of you who have been sending us your drawings and giving us fabulous reviews online – we really appreciate all of you in so many countries all over the world who have been subscribing to this podcast and sharing with others.

Oh, one word in this story you may not know is  – a Highwayman – that is just a long ago word for a kind of robber who would travel the highways and stop people on their journeys and demanded they pay him in order to pass him by.

Let’s take a journey with Sweet and Sour Berries.

Long, long, long ago in the land of China, in a village, beside a river, in a cottage near the woods, lived a little boy called Tsai Shun and his mother.

Now even though Tsai Shun was just a child, he had to work hard every day to help his mother.  Every morning, he fed the chickens, cut firewood, fetched water from the well, and lit the stove to make breakfast.  And for the rest of the day, he toiled in the fields alongside his mother.

The year that Tsai Shun turned eight years old, a drought fell on the land.  No rain fell.  The soil grew parched and cracked.  There was no food.  Tsai Shun’s mother grew thinner and thinner. Every day, she fretted and worried about how to feed her son, and then one day, she became ill.  She could not even leave her bed.

And so, Tsai Shun set off for the fields, hoping to find some wild cabbage they could eat.  But he had to return home empty handed with a heavy heart – he had nothing to feed his poor mother.

But as he entered the courtyard, he sensed something was wrong.  All the chickens were gone.  The door of the cottage was wide open, and inside, the tables and chairs were all overturned.  Clothes, pots and pans, and broken plates were scattered everywhere.

Tsai Shun hurried into his mother’s room and found her lying on the floor.

“Some Highwaymen ransacked our cottage,” panted his mother, trying to catch her breath.  “I tried to stop them, but one of them struck me down.”  Poor Mrs. Tsai sobbed as Tsai Shun helped her to climb into bed again.

Then he went into the kitchen and checked the rice jar – not a single grain was left.   Tsai Shun felt the horrible pang of hunger in his belly, and his heart ached too, because he knew his poor, sick mother was just as hungry as he was.   He had to find them something to eat – perhaps; if he went further into the woods he would be able to find some wild berries.

“Wait here, Mama,” he said.  “I will go into the woods and maybe I can find some berries that I will bring home for you to eat.”

Tsai Shun grabbed a basket from the kitchen and set off into the woods.

Then he stopped.  “Mama is still hungry.  I must pick some berries for her.”  As he picked, he made up a little song.

One for Mama, one for me!

Soon his basket was brimming with fat, juicy berries. “Mama! Mama!” he cried as he charged into the cottage.  “See I found some berries for you.”

Mrs. Tsai slowly, slowly pulled herself up in the bed. She picked a berry and popped it into her mouth.  It was delicious.  She ate one after another after another, until she was no longer hungry.

“My dear boy,” she whispered, “you are such a good child.  Already I am feeling much better.”

“Don’t worry, Mama, tomorrow I will go back into the woods and gather more berries so we won’t have to worry about food for a while.”

The next morning, Tsai Shun grabbed two baskets from the kitchen and set off again for the woods.  But when he came to the tree where he had picked the berries the day before, he burst into tears.  There were hardly enough berries left on it to fill one basket.

But then he caught sight of another tree nearby that had some berries growing on it. They were a bright red color.  He plucked one and ate it.  “Uggh” It was sour!

What shall I do, he wondered.  There are not enough sweet berries for us both.

Sweet for Mama, sour for me.

Sweet for Mama, sour for me.

When he had filled both baskets, he headed home.

“Sweet for Mama, sour for me!

Sweet for Mama, sour for me!” he sang as walked along

But suddenly, he heard a loud cry.  A man dressed all in black, and wearing a black mask, leaped out from the bushes.  He was a Highwayman.  “You have to pay me for using my road,” he shouted.

Tsai Shun began to cry.  “But I don’t have any money.  Please don’t hurt me,” he begged as he tried to hide the two baskets behind his back.

The Highwayman stamped his foot in anger.  “You’re lying,” he growled.  “What are you hiding behind your back?”

“Just…just…two baskets of b –b- b- berries,” stammered Tsai Shun.

“Give them to me,” ordered the Highwayman.

Tsai Shun laid them down on the ground at his feet.

The Highwayman picked up a red berry and put it in his mouth “Arrgh – it is soooo sour!  How can you eat this?” he yelled.

Tsai Shun began to cry again.  “You are eating all my Mama’s berries.  She is sick. We are hungry. We don’t have any food in the house.”

“Stop crying,” growled the Highwayman.  “Big boys don’t cry!  I don’t believe a word you are saying.  If you are hungry, you can’t be happy.  But you don’t look unhappy.  I heard you singing just now.”

“I was singing to remind myself to give all the sweet berries to my mama,” said Tsai Shun.  “The sour ones are just for me.”

“Well, I have never ever heard of someone doing something like this.  Why should I believe you?”

The Highwayman was silent for a moment and then he said, “Let me hear you sing that song once more. “ So Tsai Shun sang again,

“Sweet for Mama, sour for me!

Sweet for Mama, sour for me!

Then, a huge tear trickled down the Highwayman’s cheek.

“This made me think about my own sweet mother,” wailed the highwayman.  “I left her many years ago when I ran away from home.”

He wiped away his tears and pointed to the basket.  “You may go home now.  Take your berries with you.”

Tsai Shun picked up the baskets and ran home. He gave his mother the berries and told her all about the Highwayman he had met in the forest.

That night, Tsai Shun and his mother woke up to the sound of footsteps outside coming up the path to their door.  They held their breath as they listened to the rustling sounds outside the door.  But then the footsteps went away and all was quiet and still again.

But all night long Tsai Shun and his mother lay awake, too frightened to fall asleep.

The next morning when Tsai Shun opened the door, a large bag of rice filled the threshold.  A note hung from the bag.  It read:

I hope this bag of rice will help you and your mother get through hard times.

Your Friend From the Woods

From that day on, no Highwayman ever came to that village again, and Tsai Shun and his mother lived together in great peace and contentment.

Wondering what nice thing you are planning to do for your mum this mother’s day – if you live in the States?  And even if you don’t live in States, you still might want to do something nice for your mum!

Happy Mother’s Day to all you wonderful Mums wherever you live!

Join me next time for Journey with Story.