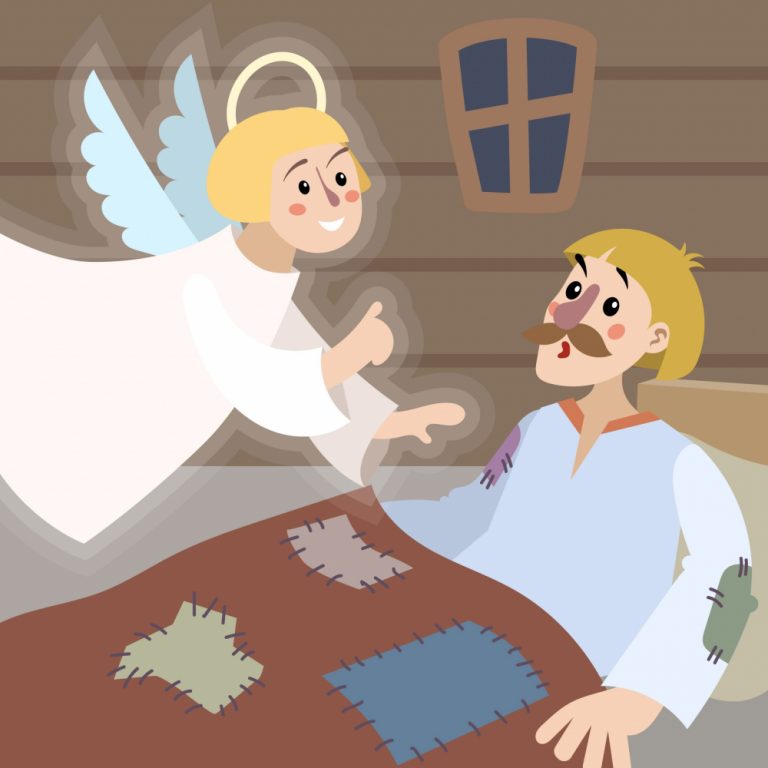 In this Russian folktale an angel gives a poor man a most unusual gift.  A lovely tale to celebrate this season of giving and a reminder of what makes the most precious gift.  (duration 11 minutes) An episode from Journey with Story, a storytelling podcast for kids ages 5-10.

Hello everyone. I’m Kathleen Pelley. Welcome to Journey with Story.  I wonder how you answered my question about the best gift you have ever received or given, because of course, this is the time of year, where many, many people around the world get ready for Christmas by buying gifts for one another.  And today’s story is about an Angel who gives a poor man a rather unusual gift.  Let’s take a listen and find out just what it is ….

Before we do so, thanks to all of you who have given the gift of support to this podcast – whether by subscribing to our patreon list, rating our podcast, sending us your children’s drawings, or writing a lovely review for us – that is definitely a wonderful gift that we are so appreciative for.

Now let’s take a journey with The Angel’s Gift an old tale from Russia.

Once upon a time, a poor man had so many children that he didn’t know what to do. He always worried about how he was going to feed and clothe them, and every night he begged the good Lord to help him.

One night, as he was sleeping, an angel came to him and whispered in his ear.

“When you awake, put your hand beneath your pillow. There you’ll find three things. Hide them in your shirt and go out into the woods. There you will find a stream; you must follow it until you come to a beautiful maiden bathing in the waters. She will speak to you, but you must not answer. She will ask you to comb her hair, and this you must do. And while you are combing her hair, you will see one hair that is red and coarse. Pluck that hair from her head, and run as fast as you can. She will chase you. As you run, drop the three things you find: the embroidered scarf, the red handkerchief and the mirror.

“When you reach the hill near your village, you will be safe. Take good care of that single hair for it will make you rich.”

When the man woke and put his hand under his pillow, sure enough he found an embroidered scarf, a red handkerchief and a mirror. He carefully hid them under his shirt and set off for the woods. When he came to a stream, he followed it. Before long, he found a beautiful maiden bathing.

“Good day!” she said, but the poor man remembered the angel’s warning and did not say a word. The maiden held out a golden comb. “Please, will you comb my hair?” she asked.

Still silent, the man took the comb, parted the maiden’s long, golden hair and searched until he found one red, coarse hair. He twisted it around his finger, pulled it out and ran.

The maiden wrapped a large scarf around herself, and gave chase, but just as she was about to overtake him, he dropped the embroidered scarf. It was so beautiful that she could not help herself. She stopped and stared at it for a while, and this gave the man time to race ahead.

When she noticed how far away he was, she began to run again. She ran like the wind, and soon she was close again, but this time he dropped the red handkerchief. Seeing the flash of crimson, the maiden stopped and bent down to pick it up.  So enchanted by its beauty was she that she stood and stared at it for a long time, while the man raced ahead.

But when the maiden finally looked up and saw the man was far in front of her, she tossed away the handkerchief, and ran faster than ever. She ran as fast as a deer and was soon nearly upon him.

At once the man dropped the mirror.

Now the maiden was rather vain and never missed a chance to gaze upon her own reflection, and so she picked up the mirror and peered into it for so long, that the man was able to reach the hill just beyond the town where he lived, with the precious hair wrapped around his finger.

When he entered the market, he offered the hair to the first merchant he saw. “I’ll give you a gold coin,” the merchant said.

The other merchants overheard him, and they knew this man to be wise and careful, so they thought the hair must be worth far more, and they began to shout out bids: “I’ll give you two!”

The poor man shook his head. “That isn’t enough,” he said, and this convinced the other merchants that this hair must truly be worth a fortune. It must be magic, they whispered, and everyone began to get excited about the magic hair.

Every merchant from every town began to bid. Hearing of the bidding war, others came too, and soon no one talked of anything but the magical red hair. Some people said whoever owned the hair would be stronger than anyone in the world. Others said its owner would possess more wisdom than anyone else. Still others said the hair brought good health and great fortune to its owner.

Before long, stories of the red hair reached the tsar, and the tsar decided he must have this hair. He offered a hundred bags of golden coins.

When the man received this offer, he accepted it, and the hair was sold to the tsar, and the poor man and his family lived happily ever after.

The tsar presented the hair to his wise men. They stared at it and whispered and wondered at it, and at last they split it open and found a scroll inside. The wisest men studied the inscription inside that scroll, and they discovered all the secrets of the world. It was these secrets that helped humankind for thousands of years.

That is why the angels say that if you save one human being, you save the world, because this angel saved one man and, in doing so, helped to make the world a better place.

So, what did you think of the “gift” the angel gave to the poor man?  It wasn’t really a gift you can feel or touch- it was a set of instructions that led him to find wealth and good fortune, wasn’t it?  Makes you wonder – maybe the best kind of gifts are just like that – not something you can feel or touch, but rather something that  gives you wisdom or hope or encouragement.