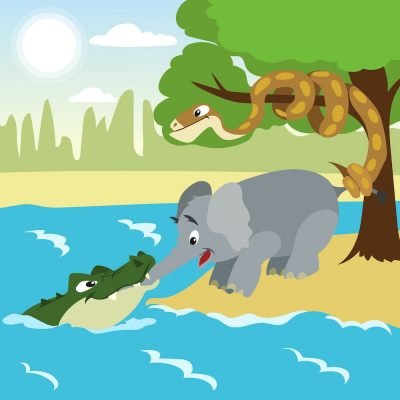 This baby elephant has an “insatiable curiosity” and when he asks his family what the crocodile eats for dinner, no one will tell him and so he sets off to find out for himself.  A classic Rudyard Kipling tale (adapted by Kathleen) that explains the origin of the elephant’s trunk.  (duration 14 minutes)  An episode from Journey with Story, a storytelling podcast for kids.

Discover How Elephants Got Their Trunks

By Rudyard Kipling  (adapted by Kathleen)

Would you say you are a curious person?  Do you like asking a lot of questions?  Do you wonder a lot about all sorts of things in the world?  Where do you got to find out the answers to your questions?

Hello Everyone.  I’m Kathleen Pelley.  Welcome to Journey with Story. Today’s story is a famous tale written by Rudyard Kipling about a baby elephant who is so curious, he simply cannot stop asking questions from everyone – they say he has an INSATIABLE curiosity.  That might be a new word for you –but I bet by the end of the story you will know what insatiable means.

Big thanks to all of our wonderful Patreon subscribers who are enjoying all sorts of wonderful perks such as our coloring sheets, stickers and autographed books.  You can find out how to subscribe on our episode notes.

Shout out to loyal listeners, Isabelle, Fiona, and Sam –and a happy belated birthday to Fiona whose mum bought my book, The Giant King for her, because it is one of her favorite JWS episodes.  Enjoy, Fiona!

So, let’s take a journey with The Curious Elephant’s Child

One morning, the Elephant’s Child thought of a new question – one he had never asked before.  He said, “What does the Crocodile have for dinner?
Everyone said, “Hush.  Be quiet.  No more questions!”

As the Elephant’s Child was walking away, he spotted the Kolokolo Bird.  He told the Kolokolo Bird, “Everyone is mad at me.  They keep telling me to be quiet.  They say I have too many questions.  But I still want to know, “What does the Crocodile eat for dinner?”

The Kolokolo Bird told the Elephant’s Child, “Go to the Limpopo River and sit on the bank.  You will find out.”

The next day the Elephant’s Child packed a basket full of food” a hundred pounds of bananas, a hundred pounds of sugar cane, and seventeen melons.  He said farewell to all of his family.  “I am going to the great gray-green, greasy Limpopo River,” he told them.  “I will see for myself what the Crocodile eats for dinner.”

They all wished him luck and told him they hoped he found the answer to his question.

The Elephant’s Child traveled east by north, eating bananas, sugar cane, and melons to sustain him.  He dropped the rinds and the peelings as he went, because of course, he could not pick them up with his short nose.

At last he came to the banks of the great gray-green, greasy Limpopo River.  He sat on the bank by the fever tress.

Now it is important for you to understand that the Elephant’s Child had never seen a Crocodile before.  He didn’t know what a Crocodile looked like.  But he was still full of curiosity, because he had an insatiable curiosity.  The first thing he saw was a  Bi-Colored-Python-Rock-Snake.  It was curled around a rock.

“Excuse me,” said the Elephant’s Child, who always minded his manners, “have you seen a Crocodile in these parts?
“Have I seen a Crocodile?” said the Bi-Colored-Python-Rock- Snake, in a very irritated voice.  “What question will you ask me next?”

“Excuse me,” asked the Elephant’s Child, “but what does the Crocodile eat for dinner?”

The Bi-Colored-Python-Rock-Snake  told the Elephant’s Child, “Go right up to the edge of the great gray-green greasy Limpopo River and sit by the trees.  Watch for the Crocodile, and you will see for yourself what he eats.”

“Excuse me,” said the Elephant’s Child very politely as always, “have you seen a Crocodile in these parts?

The Crocodile winked one eye and lifted his tail out of the mud.  “Come hither, little one,” said the Crocodile.  “Why do you ask me such a question?”

“Excuse me, but I want to know what  a Crocodile eats for dinner,” replied the Elephant’s Child.

“Come hither, little one.  I am the Crocodile.

The Elephant’s Child grew very excited.  He kneeled down on the bank.  “You are the Crocodile I have been looking for all these days.  Will you please tell me what you eat for dinner?”

“Come hither, little one, I will whisper the answer to you,” said the Crocodile.

The Elephant’s Child put his head next to the Crocodile’s large mouth.  He wanted to hear the answer to his question.

This annoyed the Elephant’s Child.  He said, speaking through his nose, “Let go, you are hurting me!”

The Elephant’s Child was happy to be free from the Crocodile’s mouth.  But his nose was so long and so out of shape.  He wrapped it in cool banana leaves and put it in the water of the great gray-green, greasy, Limpopo River to cool.

“What are you doing?” asked the Bi-Colored-Python-Rock-Snake.

“Excuse me,” said the Elephant’s Child, but I am waiting for my nose to shrink.”

“You are going to be waiting a very long time.  Maybe you should think about how many good things this long trunk can do.”

The sun was getting very hot.  The Elephant’s child put his long trunk in the mud of the great gray-green, greasy, Limpopo River and sprayed the cool mud on his head.  The cool water and mud went all over his back.  He could never have done that with his short nose.

The Elephant’s Child decided to go home to show all his family his long trunk and all the wonderful things that he could do.

As he walked home, he ate all the fruit he wanted in the tall trees.  He scratched his back with a branch, he put cool water on his back when the sun was hot.  He even picked up the melon rinds that he had dropped on the way to the river.  These were all things he could never have done with his short nose.    He especially liked the way the long trunk made him sound when he sang.  The trunk made his singing louder and more beautiful.  It sounded like several brass trumpets.

When the Elephant’s Child go home that evening, everyone was glad to see him.

He told them about his visit to the great gray-green, greasy Limpopo River.

“I asked the Crocodile what he ate for dinner, and he gave me this long trunk to keep,” said the Elephant’s Child.

Some animals said that his trunk was ugly, but the Elephant’s Child said, “It may be ugly, but it is very useful.”  He showed them how he could get fruit from the tallest tree.  How he could pull up clumps of grass and put them in his mouth.  How he could spray water on his back when he was hot.  He showed them how he could make a loud sound with his trunk that was like brass trumpets.  His family was so excited.  They thought his long trunk was very useful.  One by one all the other elephants went to the banks of the great gray-green, greasy Limpopo River to get long noses from the Crocodile.  Ever since that day, all the Elephants you’ll ever see will have long and useful trunks exactly like the trunk of the insatiable curious Elephant’s Child.