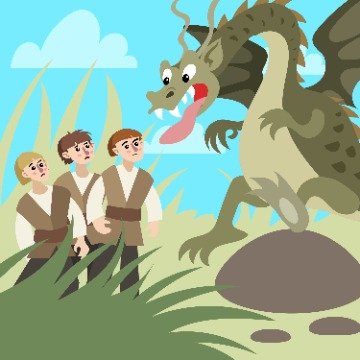 A fun folktale from the Brothers Grimm about three soldiers who make a bargain with a dragon so they can escape the army and with a little help from a magic whip the dragon gives them, they are able to live a grand life for seven years.  But when the seven years are up, it is time to keep their part of the dragon and become his prisoners, unless they can solve the riddle he poses to them.  An episode from storytelling podcast, Journey with Story.  (duration  12 minutes) Ages 5-10


The Dragon and His Grandmother

Have you ever made a promise to someone that you would do something in the future – like a long time from now- and then, when it came time to actually keep that promise, you realized you really did not want to do what you said you would do?  How did that turn out for you?

Hello everyone.  I ‘m Kathleen Pelley.  Welcome to Journey with Story.  Today’s episode is an old fairytale from the Brothers Grimm about three soldiers who do just that – they make a promise to a fierce dragon, but when the time comes for them to keep to their promise, they realize it will not end well and so they have to come up with another plan.

Big thanks to all of you who have been rating, reviewing, and sharing this podcast with others.  We really appreciate your support.  And if you haven’t already done so, please take a moment now to rate and review us.  Thanks ever so much.

Now let’s take a journey with… The Dragon and His Grandmother.

Once upon a time…

There was a great war, and the King had a great many soldiers, but he gave them so little pay that they could not live upon it. Then three of them discussed the matter among themselves and decided to leave the king’s army and go off into the world on their own.

One of them said to the others, ‘ But if we are caught, we shall be hanged, and so how can we avoid that?”

‘Do you see that large cornfield there?” said one of the others.  “If we were to hide ourselves in that, no one could find us.  And tomorrow, the army is set to march onwards and then we can go our own way.

The three of them crept into the corn and waited for the army to pass by, but….they did not.  The army remained in camp day and so the three men were forced to remain hidden in the corn for two days and two nights.

“What was the use of us leaving the army, only to die of hunger here in this field?” they asked themselves miserably.

Whilst they were speaking a fiery dragon came flying through the air. It hovered near them, and asked why they were hidden there.

Whilst they were speaking a fiery dragon came flying through the air. It hovered near them, and asked why they were hidden there.

When they explained their predicament, the dragon said, ‘If you will serve me for seven years, I will lead you through the midst of the army so that no one shall catch you.’

The three men agreed at once, saying, ‘We have no choice.  We will accept your offer.”

At once the dragon scooped them up in his enormous claws and flew high up into the air, over the army, and on an d on to a far off place where he released them on the ground.

He gave them a little whip, saying, ‘Whip and slash with this, and as much money as you want will jump up before you. You can then live as great lords, keep horses, and drive about in carriages. But after seven years you are mine.’

Then he put a book before them, which he made all three of them sign. ‘I will then give you a riddle,’ he said; ‘if you guess it, you shall be free and out of my power.’

The dragon then flew away, and they journeyed on with their little whip. They had as much money as they wanted, wore grand clothes, and made their way into the world.

Wherever they went they lived in merrymaking and splendor, drove about with horses and carriages, ate and drank, but did nothing wrong.

The time passed quickly away, and when the seven years were nearly ended two of them grew terribly anxious and frightened, but the third made light of it, saying, ‘Don’t be afraid, brothers, I wasn’t born yesterday; I will guess the riddle.’

They went into a field, sat down, and the two pulled long faces. An old woman passed by, and asked them why they were so sad.

‘Who knows?’ she answered. ‘Only confide your trouble in me.’

The two gloomy fellows hought, ‘That won’t save us!’ and they remained where they were.

But the third hopeful one jumped up and went into the wood till he found the rock hut. In the hut sat a very old woman, who happened to be the Dragon’s grandmother.

“What are you doing here?” she croaked.

At once the lad told her all that had happened to him and his companions.  And when his sorry tale was told, the old grandmother took pity on him and offered to help.

She lifted up a large stone which lay over the cellar, saying, ‘Hide yourself there; you can hear all that is spoken in this room. Only sit still and don’t stir. When the Dragon comes, I will ask him what the riddle is, for he tells me everything; then listen carefully what he answers.’

Sure enough, at midnight the Dragon flew in, and asked for his supper. His grandmother laid the table, and brought out food and drink till he was satisfied, and they ate and drank together.

Then in the course of the conversation she asked him what he had done in the day, and how many fools he had tricked. ‘I haven’t had much luck to-day,’ he said, ‘but I have a tight hold on three soldiers.’

‘Indeed! three soldiers!’ said she. ‘Who cannot escape you?’

‘They are mine,’ answered the Dragon scornfully, ‘for I shall only give them one riddle which they will never be able to guess.’

‘What sort of a riddle is it?’ she asked.

When the Dragon had gone to bed, his old grandmother pulled up the stone and let out the soldier.

‘Did you pay attention to everything?’

‘Yes,’ he replied, ‘I know enough, and can help myself splendidly.’

Then he went by another way through the window secretly, and in all haste back to his comrades. He told them how the Dragon had been outwitted by his grandmother, and how he had heard from his own lips the answer to the riddle.

Then they were all delighted and in high spirits, took out their whip, and cracked so much money that it came jumping up from the ground.

When the seven years had quite gone, the Dragon came with his book, and, pointing at the signatures, said, ‘I will take you underground with me; you shall have a meal there. If you can tell me what you will get for your roast meat, you shall be free, and shall also keep the whip.’

Then said the first soldier, ‘In the North Sea lies a dead sea-cat; that shall be the roast meat.’

The Dragon was much annoyed, and hummed and hawed a good deal, and asked the second, ‘But what shall be your spoon?’

‘The rib of a whale shall be our silver spoon.’

The Dragon-made a face, and growled again three times, ‘Hum, hum, hum,’ and said to the third, ‘Do you know what your wineglass shall be?’

‘An old horse’s hoof shall be our wineglass.’

With a piercing shriek, the Dragon flapped its wings and soared up into air, flying off in a plume of fiery rage.

And the three soldiers were free again with their little whip to live long and happy lives for the rest of their days.

Whew – that was a lucky escape for those three soldiers, wasn’t it?  I wonder though – why do you think the dragon’s grandmother decided to help the soldiers out?  I wonder why she didn’t side with her grandson, the Dragon?  What do you think?

Remember – send us your drawings and pictures so we can share with others and to get a shout out on our podcast. 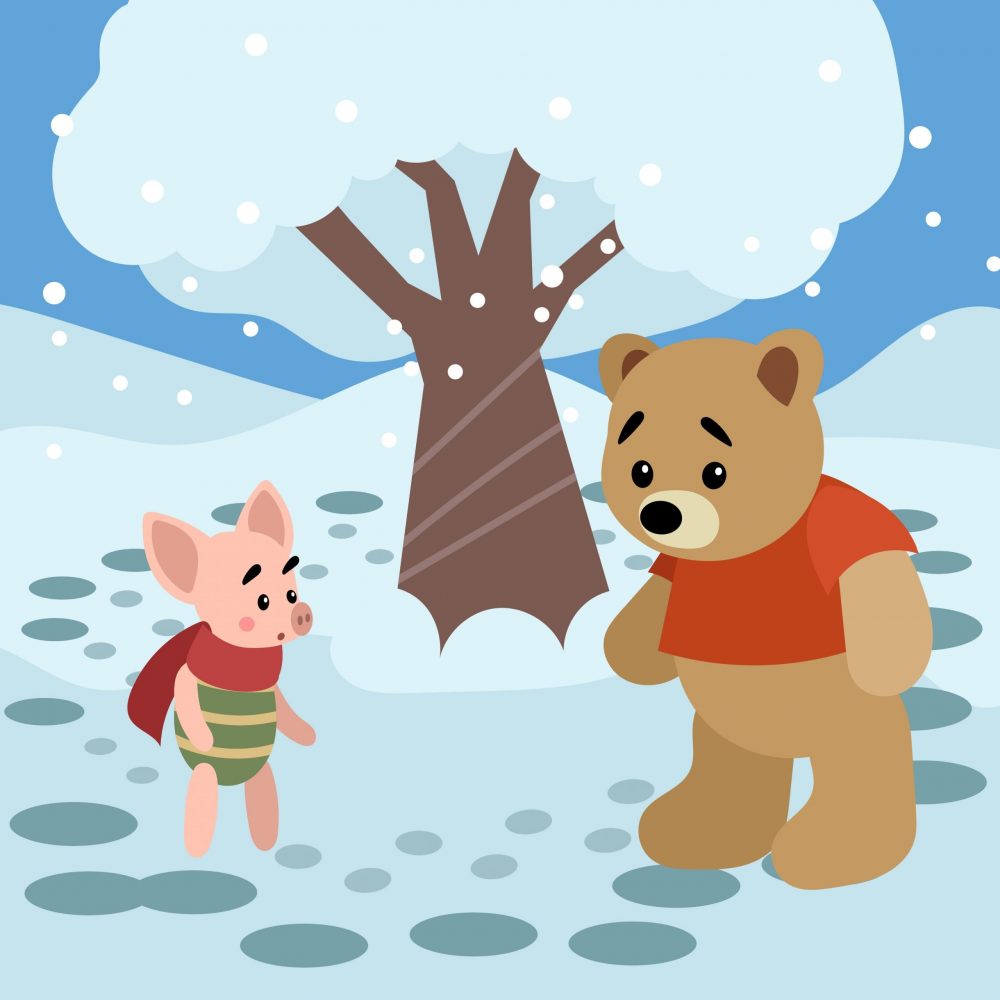 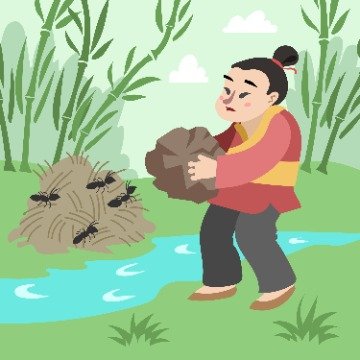 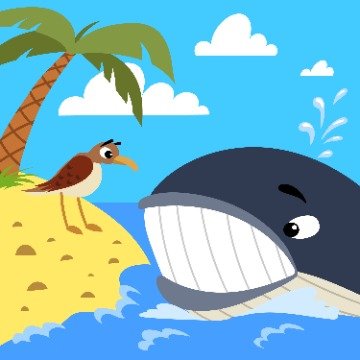 The Dragon and His Grandmother: E205 A fun folktale from the Brothers Grimm about three soldiers who make a bargain with a dragon so they can escape the army and