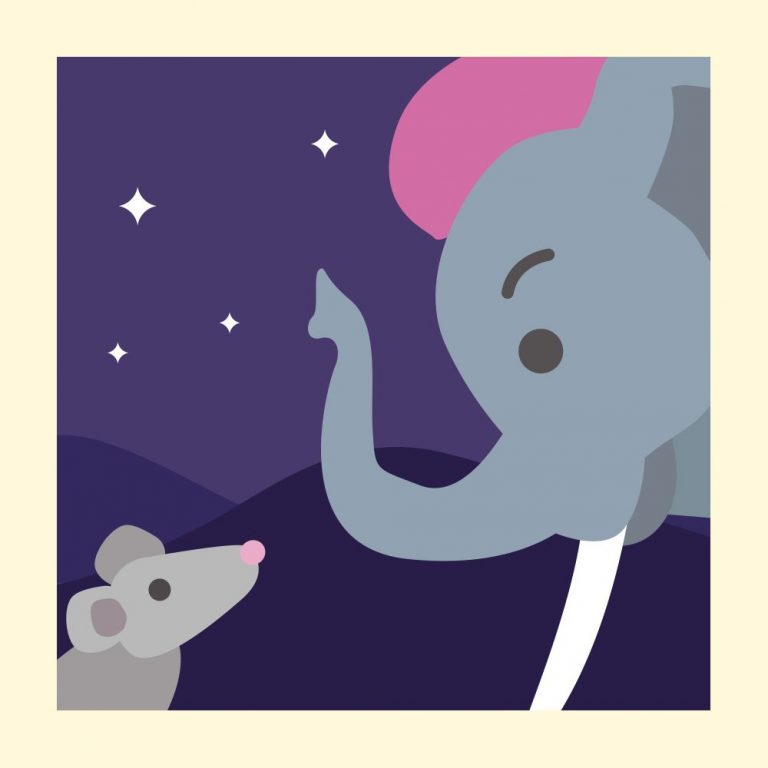 A herd of elephants and a community of mice learn to live together in friendship and harmony in an abandoned Indian village – An old Indian folktale that celebrates the truth that kindness breeds kindness.  (duration 9 minutes) An episode from Journey with Story, a storytelling podcast for kids.

Have you ever heard the expression – one good turn deserves another?   What does that mean?  Yes, it just means if you are kind to someone, often that kindness will be repaid in some way or another.

Hello everyone. I’m Kathleen Pelley, Welcome to Journey with Story.  Today’s story is an old tale from India about some elephants who are kind to the mice they meet and so the mice end up repaying that kindness.  It might remind you of another story about kindness from this podcast.  Let’s see if you can tell me what story that is when I am finished.

Remember everyone you can send me your picture on IG at JWS.  And, mums and dads, if you are enjoying this ad free podcast, it would really help us if you would subscribe, rate, and review and share it with others.

Let’s take a journey with The Elephants’ Reward

Once upon a time there was an ancient village in India on a wide, blue lake. The town had been deserted, and after the people left, the forest took over, covering the crumbling walls with vines and foliage. At the same time, the mice in the village crept out of their hiding places and went to live in the empty houses.   There they remained undisturbed and enjoying peace and prosperity for many years.

But one day as they went about their daily business, the mice heard a rumbling sound in the distance.

“What can that be?” the tiniest mice asked their mothers and fathers, and the older mice looked at each other in alarm as the sound grew closer and louder. The ground beneath their tiny feet began to shake.

“It must be a storm moving toward us,” one of the elders said, but the others shook their heads, for now they all felt the ground trembling. “An earthquake then?” another asked, and again they looked at each other and twitched their whiskers in fear.

“What it is?” the tiniest mice squeaked. They quivered and quaked now as the roar grew closer, for when they looked up at the sky, they saw that it was bright blue with a blazing sun and not a single cloud in sight. “If it isn’t a storm, what is it?”

The mice continued to look around in confusion when suddenly huge dark shapes appeared on the horizon. A herd of mighty elephants loomed before them.

“Look!” some of the mice cried as they saw the herd thundering toward them. “Watch out, they’ll trample us!”

The herd barreled closer, and the mice began to scatter, hurrying this way and that, ducking into the hiding places they had years before abandoned. As the herd pounded through the village, they crushed some of the little mice beneath their huge feet in their rush to reach the lake.

You see, the poor elephants were dying of thirst, for a terrible drought had devastated their land. When they heard there was a deserted village on the banks of a big lake, they had hurried toward the water without a thought of what they might destroy in their path.

“What shall we do?” the mice squealed in horror as they watched the herds plowing deep ruts in the road, destroying many homes as they passed.

“I shall talk to the elephant king,” said the king of the mice. “He will understand.”

And so, summoning all his courage, the tiny mouse king scurried to the edge of the lake to seek a word with the grand elephant king.

“Sire,” he said, looking up and up at the enormous creature with the gigantic ears and the wrinkly skin and those terrifying tusks. The look of the elephant king was enough to frighten anyone, but the mouse king was brave. “I have come to ask you to be good to the mice,” he said.

The elephant king looked down and squinted, and it took him a while to notice the little speck of brown at his feet. “Is that you talking?” he asked the mouse king, lowering his head so that he might see the tiny creature.

“It is I,” the mouse king answered proudly, “and I’ve come to ask you to be good to our mice and not to trample us on your way to the lake. We have plenty of water to share with you, but you must be careful not to crush our homes and harm our babies. Your people must watch where they step or we will have to ask you to leave.”

Now the elephant king was a noble creature, and when he realized that he and his fellows had harmed the inhabitants of this town, his heart ached. “Please forgive us,” he said to the mouse king. “From now on we shall walk the long way round to the lake. We will take care not to walk upon any of your people. If only I had known, we never would have marched through the center of town. This will never happen again.”

The mouse king bowed. “My people and I thank you and yours,” he said, “and we shall always be here to help you if ever you need us.”

The elephant king smiled to himself. He did not say it out loud, but he could not imagine how this tiny little fellow could ever help such large and strong creatures as elephants. Still, he was glad to live in peace.

And so the mice and elephants lived in friendship for years, sharing the bounties of the lake and the surrounding country. And then one year, as the elephants gathered for their monthly town meeting, it was their turn to hear the sound of thunder in the distance and to feel the ground beneath their feet trembling. “What can that be?” they asked each other as the sound grew louder.

Suddenly a king and his army galloped into town, mounted on powerful steeds. They drew their swords and held their bows at the ready, and chased down every elephant they could find. One by one they captured the largest and strongest of the elephants, and these they wrestled to the ground with thick ropes, which were then used to tie them up.

“Tomorrow we shall come back to retrieve our tusks and meat,” the men said when they were finished with their long day’s work.

As the dust settled and the sound of hooves retreated, the great elephants lay upon the ground, helpless to escape, groaning and trumpeting in despair.

And then, just as the sun began to set, hundreds and hundreds of mice crept out of their hiding spots. They scampered over to the helpless giants and went to work at once, gnawing at the ropes that tied their friends.

By midnight all the elephants were free again.

What story did this remind you of from an earlier episode of JWS?  YES – Lion and Mouse – a fable by Aesop OR …some of you might have said, Androcles and the Lion – and that would be true as well – both of those are fables by Aesop and both of them have the same story souvenir – the same truth – No act of kindness is ever wasted.

So…. whenever we can, we should try and BE KIND!

Cheerio then join me next time for JWS.