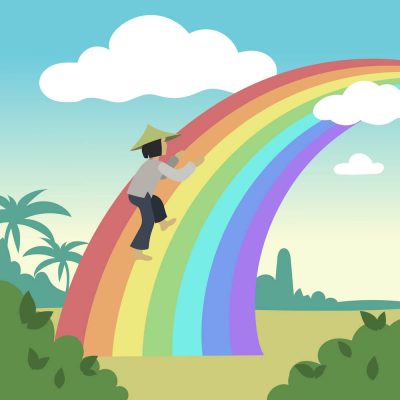 Discover How to Spread Cheer and Hope with this Folktale from the Philippines.

A tender tale from the Philippines about a special STAR GIRL, who comes to live on earth and marry a poor farmer, but after some years, she grows so homesick for her home in the sky, that she decides to return there, breaking her husband’s heart. But the gods take pity on the husband and make a special rainbow bridge that leads him to his beloved wife.  (duration – 9 minutes) An episode from Journey with Story, a storytelling podcast for kids.

Have you ever been homesick – maybe you went away for a weekend to go camping with a school group – or just an overnight with a friend, and then you found yourself wishing you were home because you missed it so much.

Hello everyone, I’m Kathleen Pelley. Welcome to Journey with Story.  I remember when I was a wee girl, I did get a little homesick whenever I was away from my home, and even when I was a grown up and came to live in America, I was homesick for my country – I missed my land, Scotland.  Well today’s story is an old tale from the Philippines about a special STAR GIRL who comes to live on earth but after a while she gets very homesick for her home in the sky and has to decide whether to stay on earth or leave….It also explains how the first rainbow came to be.

Let’s take a journey with  The First Rainbow.

The First Rainbow – a story from the Philippines

Long, long, long ago on an island called Luzon, there lived a farmer who had a small coconut farm.  He had built a huge wall all around his field to protect it from thieves and intruders.

But one day, he discovered the wall had been knocked down.  So he set to work at once to rebuild it, and worked all through the hot day until he had finished just as dusk fell.  That night he fell into a deep sleep, so exhausted from all his labor.

Rising at dawn, he hurried off again to his fields, but, what should he see but – another part of the wall had been knocked down.  Once again, he spent the whole day repairing it and once again he fell into a deep sleep that night.  But when he discovered the next morning that someone had torn down the wall for a third time, he decided the only thing he could do to prevent this from happening again was to stand guard himself all night long and catch the culprit.

So, off he went to hide behind a tall tree in the corner of the field.  The sun set and the moon rose and then a huge cloud blotted out the moonlight and all turned an inky black.  Suddenly the farmer heard something – a short sharp whoosh of air.  He tiptoed from behind the tree and watched as three stars fell from the sky.  They headed straight for the wall, and just before they landed, they turned into…three beautiful girls. Their hair was black and soft like velvet, their skin shimmered like silver, and a pair of large, feathery wings fluttered at each of their sides.

“Wait! Stop!” the farmer cried. He ran toward them, and two of the girls quickly spread their wings and vanished into the sky. But the third girl did not move — she seemed stuck to the Earth, and the farmer was able to catch her. He held her by the arms.

At first he began to scold her for destroying his wall, but when he looked into her eyes, he knew she was a sweet and gentle spirit and he at once fell in love. Now he could not bear to ever let his star girl go.

The star maiden looked into the farmer’s eyes, and she too felt a tugging at her heart, knowing that he was a good and kind man.  She did not run away. “I’ll stay,” she said.

The farmer was overjoyed. “Come inside with me,” he pleaded.

The star maiden smiled and followed him into the house, where she plucked off her wings, folded them and laid them in her lap as they talked together.  The hours passed and the farmer began to worry that she still might leave him.  “Please, give me your wings,” he said. “ I will look after them.”

Because she trusted him, the girl gave him her wings.

The very next day the farmer hid those wings, for deep down he was afraid that if the girl found them, she would leave him, and he knew his life would be meaningless without her.

Days and weeks and months passed and over time the star girl fell in love with the farmer, and agreed to marry him.

Some years later, they had a beautiful baby boy, and they lived together in great joy and contentment.  And soon, there came a time, when the star girl forgot all about her previous life.

But sometimes, late at night, when she happened to look up into the night sky and see the twinkling stars above, she felt a throbbing in her heart. She remembered the great silence of the sky, the whirl of planets and the many worlds she had watched and visited and dreamed of.

One morning, after her husband had left for the fields and while her son was still asleep, the star maiden happened to discover a cabinet behind the pantry. It was a cabinet she had never seen, and she carefully opened the door. And what should she see but…her wings!

She picked up those wings, unfolded them and pinned them to her shoulders. At once, she felt a quickening in her heart – a thrill of excitement.

Off she ran into her son’s room and lifted him into her arms. “Come with me, dear boy,” she whispered. She carried him outside, and cradling him in her arms, up, up, up she flew far into the sky.

That evening when the farmer came home from the fields, he called out to his wife and child. When they did not answer, he began to search frantically all through the house.   But when he found the cabinet door open and saw the wings were gone, he understood. At once he fell to his knees- his heart was broken.

For days the farmer wept. He could not move. At night he stood outside and stared into the sky, wailing to the stars, “Come back to me! I love you so. Please send her home!”

For weeks, he wept and wailed until the gods began to pity him.

They decided to build a bridge for him so he could climb to the sky and see his wife and child.

And so…that very evening the first rainbow appeared in the sky, a bridge of many colors, reaching from the Earth to the sky.

When the farmer saw it, he began to climb up and up and up.

From that day to this people say the farmer did reach his wife and child and he lived happily ever after.

They also say, that ever since, whenever someone weeps and the sun shines, a rainbow bridge appears — and with the rainbow comes a world of possibility.

In any event, it is a lovely tale to remind us of the beauty of rainbows – and this month of April, when we get lots of April showers, often followed by a rainbow, it is a good reminder for us all  – especially in these discombobulating times, that there is always hope – always a promise of good things to come to know, as my favorite poet says, all shall be well, all shall be well and all manner of things shall e well.  Be well my friends….Cheerio then join me next time for Journey with Story.