History of the Seven Families P1:E176 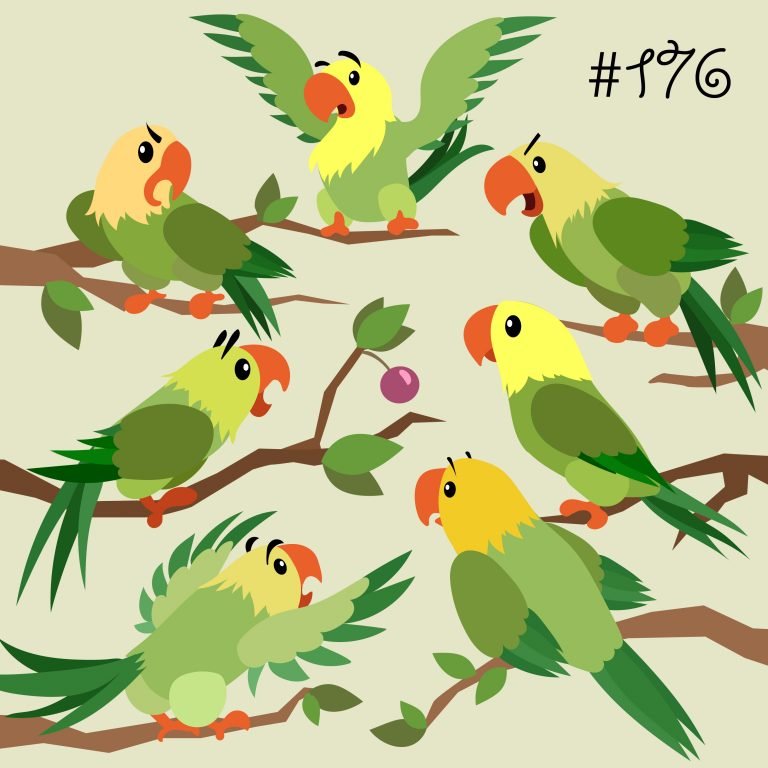 The History of the Seven Families Part 1:E176

When seven young families of storks, cats, guinea pigs, owls, parrots, and geese, set off into the world on their own, they forget their parents’ advice about not quarreling or squabbling and…it does not end well! A hilarious, nonsense poem by Edward Lear.  (duration – 15 minutes) An episode from Journey with Story, a storytelling podcast for kids.  PART 1 of 2.

The History of the Seven Families Part 1 by Edward Lear

When you are setting out to school in the morning, or when you are going off to visit a friend or meet someone at the park, do your parents or grandparents or teachers ever give you any words of advice?  Do you try to remember what they tell you and most importantly – do you do as they suggest?  Do they ever tell you not to quarrel with your brothers or sisters?

Hello everyone.  I’m Kathleen Pelley.  Welcome to Journey with Story.  Today’s episode is a wonderful nonsense story poem by Edward Lear about what happens when seven young families set off into the world on their own but….forget to take the advice of their parents and when they begin to squabble and quarrel among themselves…..well, let’s just say – it does not end well.

Mums and Dads – this is really fun nonsense poem and not meant to be taken too seriously, but if you have very little, little ones, you might want to take a listen first to make sure it is suitable for them.

In former days—that is to say, once upon a time, there lived in the Land of Gramblamble, Seven Families. They lived by the side of the great Lake Pipple-popple (one of the Seven Families, indeed, lived in the Lake), and on the outskirts of the City of Tosh, which, excepting when it was quite dark, they could see plainly.

The names of all these places you have probably heard of, and you have only not to look in your Geography books to find out all about them.

Now the Seven Families who lived on the borders of the great Lake Pipple-popple, were as follows

There was a Family of Two old Parrots and Seven young Parrots.

There was a Family of Two old Storks and Seven young Storks.

There was a Family of Two old Geese, and Seven young Geese.

There was a Family of Two old Owls, and Seven young Owls.

There was a Family of Two Old Guinea Pigs and Seven young Guinea Pigs.

There was a Family of Two old Cats and Seven young Cats,

And there was a Family of Two old Fishes and Seven young Fishes.

The Parrots lived upon the Soffsky-Poffsky trees, — which were beautiful to behold, and covered with blue leaves, — and they fed upon fruit, artichokes, and striped beetles.

The Storks walked in and out of the Lake Pipple-popple, and ate frogs for breakfast and buttered toast for tea, but on account of the extreme length of their legs, they could not sit down, and so they walked about continually.

The Geese, having webs to their feet, caught quantities of flies, which they ate for dinner.

The Owls anxiously looked after mice, which they caught and made into sago puddings.

The Guinea Pigs toddled about the gardens, and ate lettuces and Cheshire cheese.

The Cats sate still in the sunshine, and fed upon sponge biscuits.

The Fishes lived in the Lake, and fed chiefly on boiled periwinkles.

And all these Seven Families lived together in the utmost fun and felicity.

One day all the Seven Fathers and the Seven Mothers of the Seven Families agreed that they would send their children out to see the world.

So they called them all together, and gave them each eight shillings and some good advice, some chocolate drops, and a small green morocco pocket-book to set down their expenses in.

They then particularly entreated them not to quarrel, and all the parents sent off their children with a parting injunction.

‘If,’ said the old Parrots, ‘you find a Cherry, do not fight about who should have it.’

‘And,’ said the old Storks, ‘if you find a Frog, divide it carefully into seven bits, but on no account quarrel about it.’

And the old Geese said to the Seven young Geese, ‘Whatever you do, be sure you do not touch a Plum-pudding Flea.’

And the old Owls said, ‘If you find a Mouse, tear him up into seven slices, and eat him cheerfully, but without quarrelling.

And the old Guinea Pigs said, ‘Have a care that you eat your Lettuces, should you find any, not greedily but calmly.’

And the old Cats said, ‘Be particularly careful not to meddle with a Clangle-Wangle, if you should see one.

And the old Fishes said, ‘Above all things avoid eating a blue Boss-woss, for they do not agree with Fishes, and give them pain in their toes.

So all the Children of each Family thanked their parents, and making in all forty-nine polite bows, they went into the wide world.

The Seven young Parrots had not gone far, when they saw a tree with a single Cherry on it, which the oldest Parrot picked instantly, but the other six, being extremely hungry, tried to get it also. On which all the Seven began to fight, and they scuffled,

screamed, and shrieked, and squealed, and squeaked, and clawed, and snapped, and bit, and bumped, and thumped, and dumped, and flumped each other, till they were all torn into little bits, and at last there was nothing left to record this painful incident, except the Cherry and seven small green feathers.

And that was the vicious and voluble end of the Seven young Parrots.

When the Seven young Storks set out, they walked or flew for fourteen weeks in a straight line, and for six weeks more in a crooked one; and after that they ran as hard as they could for one hundred and eight miles: and after that they stood still and made a himmeltanious chatter-clatter-blattery noise with their bills.

About the same time they perceived a large Frog, spotted with green, and with a sky-blue stripe under each ear.

So being hungry, they immediately flew at him, and were going to divide him into seven pieces, when they began to quarrel as to which of his legs should be taken off first. one said this, and another said that, and while they were all quarrelling the Frog hopped away. And when they saw that he was gone, they began to chatter-clatter:

more violently than ever. And after they had fought for a week they pecked each other all to little pieces, so that at last nothing was left of any of them except their bills,

And that was the end of the Seven young Storks.

When the Seven young Geese began to travel, they went over a large plain, on which there was but one tree, and that was a very bad one.

So four of them went up to the top of it, and looked about them, while the other three waddled up and down, and repeated poetry, and their last six lessons in Arithmetic, Geography, and Cookery.

Presently they perceived, a long way off, an object of the most interesting and obese appearance, having a perfectly round body, exactly resembling a boiled plum-pudding, with two little wings, and a beak, and three feathers growing out of his head, and only one leg.

So after a time all the Seven young Geese said to each other, ‘Beyond all doubt this beast must be a Plum-pudding Flea!’

On which they uncautiously began to sing aloud,

‘O come to our tree,

And no sooner had they sung this verse then the Plum-pudding Flea began to hop and skip on his one leg with the most dreadful velocity, and came straight to the tree, where he stopped and looked about him in a vacant and voluminous manner.

On which the Seven young Geese were greatly alarmed, and all of a tremble-bemble: so one of them put out his great neck, and just touched him with the tip of his bill, — but no sooner had he done this than the Plum-pudding Flea skipped and hopped about more and more and higher and higher, after which he opened his mouth, and, to the great surprise and indignation of the Seven Geese, began to bark so loudly and furiously and terribly that they were totally unable to bear the noise, and by degrees every one of them suddenly tumbled down quite dead.

So that was the end of the Seven young Geese.

Well what do you think about what happened to these young creatures?  Do you think they deserved to be punished for not obeying their parents? I wonder if this story poem might make you think twice before you begin to squabble and quarrel with your brothers or sisters.  Did you have a favorite animal family?  I bet this wonderful nonsense poem must have painted some marvelous pictures in your head – do send us your drawings and pictures, we would love to share them – you can send them to our website www.journeywithstory.com or on IG at journeywithstory.  Oh, and don’t forget if you want to get some free colorings sheets for all of our episodes, you can download them from our website too

Be sure and stay tuned for next week’s episode which is Part 2 of the Seven Families where you will discover what happened to the Owls, the Guinea Pigs, the Cats, and the Fishes.

Cheerio then, join me next time for Journey with Story