The Little Hero of Haarlem: E118 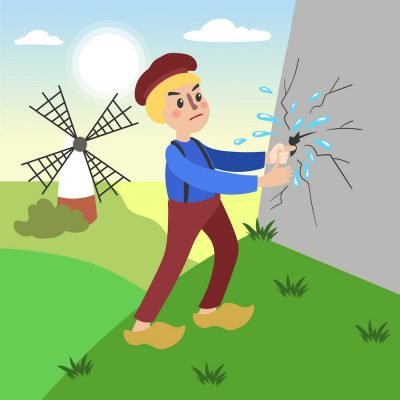 An old Dutch legend about a little boy who plugs his finger into a dyke to prevent his village from flooding.  A great story to teach children about bravery and what it means to be a hero and sacrifice your life for the good of others – a timely tale to end this year of 2020 where we celebrate and honor all our heroes who have risked their lives for others!  (duration – 8 minutes) An episode from Journey with Story, a storytelling podcast for kids.

The Little Hero of Haarlem

Hello everyone. I’m Kathleen Pelley. Welcome to Journey with Story.  Yes, we call a brave person a hero or a heroine…..Today’s story is an old legend from a country called Holland – and it is about a little boy who does a brave deed to save the people in his town.

A long way off, across the ocean, there is a little country where the ground is lower than the level of the sea, instead of higher, as it is here. Of course the water would run in and cover the land and houses, if something were not done to keep it out. But something is done. The people build great, thick walls all round the country, and the walls keep the sea out. You see how much depends on those walls,—the good crops, the houses, and even the safety of the people. Even the small children in that country know that an accident to one of the walls is a terrible thing. These walls are really great banks, as wide as roads, and they are called “dikes.”

Once there was a little boy who lived in that country, whose name was Hans. One day, he took his little brother out to play. They went a long way out of the town, and came to where there were no houses, but ever so many flowers and green fields. By-and-by, Hans climbed up on the dike, and sat down; the little brother was playing about at the foot of the bank.

Suddenly the little brother called out, “Oh, what a funny little hole! It bubbles!”

“Here in the bank,” said the little brother; “water’s in it.”

“What!” said Hans, and he slid down as fast as he could to where his brother was playing.

There was the tiniest little hole in the bank. Just an air hole. A drop of water bubbled slowly through.

He looked all round; not a person or a house in sight. He looked at the hole; the little drops oozed steadily through; he knew that the water would soon break a great gap, because that tiny hole gave it a chance. The town was so far away—if they ran for help it would be too late; what should he do? Once more he looked; the hole was larger, now, and the water was trickling.

Suddenly a thought came to Hans. He stuck his little forefinger right into the hole, where it fitted tight; and he said to his little brother, “Run, Dieting! Go to the town and tell the men there’s a hole in the dike. Tell them I will keep it stopped till they get here.”

The little brother knew by Hans’ face that something very serious was the matter, and he started for the town, as fast as his legs could run. Hans, kneeling with his finger in the hole, watched him grow smaller and smaller as he got farther away.

Soon he was as small as a chicken; then he was only a speck; then he was out of sight. Hans was alone, his finger tight in the bank.

He could hear the water, slap, slap, slap, on the stones; and deep down under the slapping was a gurgling, rumbling sound. It seemed very near.

By-and-by, his hand began to feel numb. He rubbed it with the other hand; but it got colder and more numb, colder and more numb, every minute. He looked to see if the men were coming; the road was bare as far as he could see. Then the cold began creeping, creeping, up his arm; first his wrist, then his arm to the elbow, then his arm to the shoulder; how cold it was! And soon it began to ache. Ugly little cramp-pains streamed up his finger, up his palm, up his arm, till they reached into his shoulder, and down the back of his neck. It seemed hours since the little brother went away. He felt very lonely, and the hurt in his arm grew and grew. He watched the road with all his eyes, but no one came in sight. Then he leaned his head against the dike, to rest his shoulder.

As his ear touched the dike, he heard the voice of the great sea, murmuring. The sound seemed to say,—

“I am the great sea. No one can stand against me. What are you, a little child, that you try to keep me out? Beware! Beware!”

Hans’ heart beat in heavy knocks. Would they never come? He was frightened.

Hans started to pull out his finger; he was so frightened that he felt as if he must run for ever. But that minute he remembered how much depended on him; if he pulled out his finger, the water would surely make the hole bigger, and at last break down the dike, and the sea would come in on all the land and houses. He set his teeth, and stuck his finger tighter than ever.

“You shall not come through!” he whispered, “I will not run!”

At that moment, he heard a far-off shout. Far in the distance he saw a black something on the road, and dust. The men were coming! At last, they were coming. They came nearer, fast, and he could make out his own father, and the neighbours. They had pickaxes and shovels, and they were running. And as they ran they shouted, “We’re coming; take heart, we’re coming!”

The next minute, it seemed, they were there. And when they saw Hans, with his pale face, and his hand tight in the dike, they gave a great cheer,—just as people do for soldiers back from war; and they lifted him up and rubbed his aching arm with tender hands, and they told him that he was a real hero and that he had saved the town.

When the men had mended the dike, they marched home like an army, and Hans was carried high on their shoulders, because he was a hero. And to this day the people of Haarlem tell the story of how a little boy saved the dike.

Well, Hans really was a hero, wasn’t he?  And did you notice that Hans felt afraid of the water…but he still forced himself to stay there and save the town.  So, being brave doesn’t mean you aren’t afraid – it means you feel the fear, but you keep doing what has to be done.

So – maybe this is a good story to end this year of 2020, because it reminds us all during these discombobulating times, that we need to be brave for one another – and keep our spirits up and look out for one another.

Happy New Year to all of you!  Join me next time for Journey with Story.