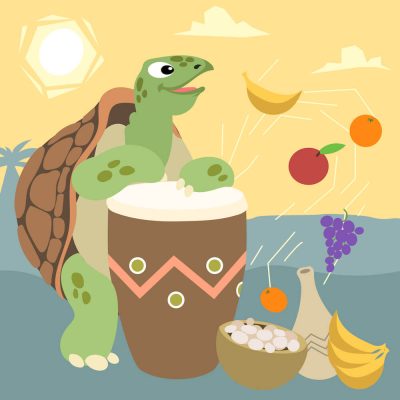 An African folktale about a tortoise who is very envious of the king’s magical drum and whose jealousy lands him in a heap of trouble. (duration-11 minutes) An episode from Journey with Story, a storytelling podcast for kids.

Hello everyone. I’m Kathleen Pelley.  Welcome to Journey with Story.  Today’s story is a folktale from Africa about a tortoise who is very envious of a king who owns a special magical drum.

Huge thanks to all of our loyal listeners who continue to send us your wonderful notes, and letters, and drawings.

PAUSE – shout out here for FLA

Let’s take a journey with The Magic Drum

Once upon a time there lived a king who owned a magical drum. Some said this drum was the secret to the peace that filled his land, because whenever the king beat upon the drum, marvelous food and drink appeared.

And so, whenever anyone declared war upon the king’s land, he called his enemies to visit the palace.  He sat before them and beat upon the drum.  At once, a feast of fine food appeared on the table and the guests gasped with amazement.

After they had shared the king’s feast, the enemies felt full and contented and forgot all about the reason they wanted to fight with this king in the first place.

But there was one catch to this. The owner of the drum could never step upon a fallen branch, for if he did, the juju – that is the magic of the drum –would disappear, and in its place the owner would reap nothing but trouble.

As the years passed, the king became a wealthy man. His palace stood upon the shores of the sea, and there he lived a happy life. Often he invited everyone in the land to attend a feast, for he was as generous as he was wealthy.

He included all the animals in these joyful parties, too, for in those days the people and the animals lived in peace. Elephants, leopards, antelopes, zebras, giraffes and baboons, all loved their king, and everyone spoke well of him.

As more and more attended the king’s lavish parties, word spread around the country about the king’s magical drum. Most were pleased, but there were some who envied the king, and everyone knows that no good ever comes from envy.

One day, a tortoise was up in a palm tree cutting nuts for his family’s meal. He was feeling rather sorry for himself, for he worked day and night to feed his family, and yet still, there seemed to be enough. Suddenly one of the nuts he had cut fell to the ground.

Now it happened that down below, the king’s wife was bathing in the stream, and when she heard the nut fall, she turned. “Ah, that would taste good,” she said, and without looking up, she ate the palm nut.

When the tortoise climbed down from the tree and saw the king’s wife, he bowed his head. “Excuse me,” he asked. “Have you seen a palm nut here? One of mine dropped to the ground.”

Now the tortoise had long envied the king’s drum, and this gave him an idea. “Dear lady,” he said, “I climbed that tree to get food for my family. We are awfully poor, and I work hard, but now you’ve stolen our food. I’m afraid I must report you to the king as a thief.”

Theft was a serious crime, one of the worst. The king’s wife quickly explained that she was married to the king, and if the tortoise wished to make a complaint, she would take him to the palace. She never meant to harm the tortoise, she told him.

And so together they walked to the palace, and when the tortoise told the king what had happened, the king said, “We are sincerely sorry. Please, let me pay you for your loss. What would you like? Coins? Cloth? Oil? Beans?”

“What would I do with coins?” the tortoise asked. “And cloth is something no tortoise requires. I do not like oil. Or beans,” he snapped.

“You may have whatever you wish. Only name it,” the king said.

The tortoise pretended to think. All afternoon he wandered around the palace, looking at this, lifting that, tasting, touching and sniffing every thing, and at long last, as the sun was setting, he looked at the king’s drum, and said, “There. I’ll take that drum.”

By now the king was tired of the tortoise, and so he gave him the drum, but he didn’t tell the tortoise about what would happen if he walked over a stick on the road.

Feeling very pleased with himself, the tortoise hurried home with the drum as fast as he could.

“I’m rich! I’m rich!” he cried. And how happy his family was to hear that never again would they go hungry.

“Show us how it works,” his children begged.

At once the tortoise began to beat the drum, and there before their eyes, appeared a feast fit for a king! They sat down and ate their fill, and every day for the rest of that week, they continued to eat their fill at the table, eating with great gusto and savoring every morsel.

The tortoise was so proud of his drum that he sent invitations to everyone in the forest to attend a feast. Before long, word spread of the tortoise’s vast wealth, and the tortoise grew fat and lazy. He no longer worked. He simply ambled around the country bragging about his riches to anyone who would listen.

One day as he was returning home, he happened to trip upon a stick, and though he did not know this at the time, the magic of his drum was instantly broken.

He arrived home tired and hungry, and his children were already begging for food. So the tortoise beat upon his drum, as he usually did, but…

but this time, instead of a table laden with fine food appearing, a swarm of enemies appeared and began to attack the tortoise and his family.

So terrified was the tortoise, that he gathered his family together and fled from his house. They headed to the riverbank, where they hid beneath mud and grass and prickly tie-tie palms, and there they have lived ever since, eating only fallen fruits and snails and slugs, millipedes and grass.

As for the magic drum, it was never seen again.  No one knows what happened to it, but there are some who say the king himself crept back one night and took it to his palace, where it is kept in a special room as a reminder for all to beware of envious thoughts that reap no good.

Well, next time I feel a little sliver of envy creeping over me, I’ll be sure to remember what happened to our tortoise in this story.  And I will be sure to focus on all the wonderful things I already have in life – thinking that gratitude helps conquer any feelings of envy.  Can you think of any other stories where bad things happen when someone is envious of what someone else has?  There are quite  few stories about that – maybe you could even make up one of your own.