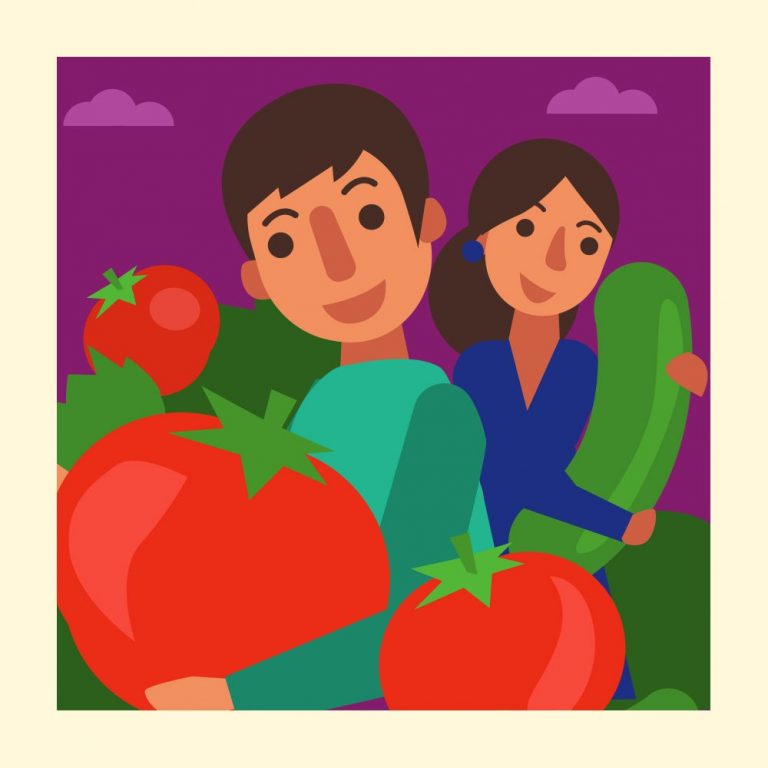 When a holy man grants three wishes to a poor Indian couple who are living a very miserly life, they discover the secret to happiness lies in friendship, generosity, and treasuring your family.  A perfect tale to remind us of that old adage – be careful what you wish for.  (duration 8minutes) An episode from Journey with Story, a storytelling podcast for kids.

Have you ever heard the saying – be careful what you wish for, you just might get it?  Do you know what it means?   Yes, it has to do with the fact that sometimes people wish and wish and wish for something, but when they actually get this wish, they find that they are unhappy and it wasn’t really what they wanted at all and they would be better of without it.

Hello everyone. I’m Kathleen Pelley, Welcome to Journey with Story.  Today’s story is a tale from India about a young couple who make a couple of wishes that they immediately regret and want to undo.

Thanks to all of you who have been connecting with me on IG and sending me your marvelous drawings.  Keep them coming to IG at JWS.

And, mums and dads, if you are enjoying this ad free podcast, it would really help us if you would subscribe, rate review an share share it with others.  Thanks so much.

Let’s take a journey with…. The Price of Greed

Once upon a time a young man named Tarun married a young woman named Nidhi.  In time they had a little boy and they were filled with joy and delight as a family.

However, after a while, their joy turned to worry.  They wanted to provide their son all that money could buy, but they were poor and barely had enough to feed and clothe him.

“Our cucumbers are not as large as our neighbors’ cucumbers,” Nidhi said as she worked in the garden. “We barely have enough to eat, and all of our vegetables are so small.”

She began to prepare meals of leftovers only. “Don’t finish all the food,” she cautioned Tarun. “If we eat all we have, we may not have enough in the future.”

Tarun started to save, and he stopped inviting friends to visit. “If they come, they may drink all our tea,” Tarun said.

When they went to visit their friends’ homes, they devoured all the food that was given to them.  When they returned home they looked at their meager belongings and despaired.

“We don’t have as much as others have,” Nidhi complained. Tarun agreed, and the couple became even more frugal.

Soon everyone understood that in this little house there lived the most miserly people in the village, and no one ever stopped by to visit.

Then one beautiful spring morning Tarun heard a knock on their door. “Who could that be?” he asked his wife.

She shrugged. “We’d better look,” she said, and they opened the door and saw a poor holy man in tattered clothes, his face gray with hunger.

“Excuse me,” he said, “but this bright sun hurts my eyes, and I am so tired. I could use a comfortable house in which to rest, and yours looked warm and cozy.“

Then he simply stepped inside, and his face lit up. “You have saved my life by inviting me in. You are most generous.”

Tarun began to panic. What if all the dust and dirt on the man’s skin and clothes soiled their home? Imagine the cost of soap they would need to clean! And what if he asked for water to drink?

Tarun looked at the man. “We have so little here, I hope…” but before he could finish, the holy man said, “I am glad you have enough to share.” At that moment Nidhi walked into the room.

“What are we sharing?” she asked, alarmed.

“Ah,” the holy man smiled, “it is hard in these times to find people like you who are kind. I am so grateful, and now since you are so generous, I’d love something to eat. After that I’ll take a nap on your floor, and then I shall leave.”

Nidhi and Tarun exchanged a look. The holy man seemed to take their generosity for granted, and they could say nothing as he lay his coat upon their best rug. Nidhi could see the dirt drifting over her furniture and floor.

“Will the meal be ready soon?” the holy man asked, and for some reason Nidhi simply walked into the kitchen and started preparing a meal. To her amazement, she found many cucumbers and tomatoes to chop, and then she cooked a big pot of rice, and on a tray she placed bowls of chutney and curry.

Tarun watched in astonishment as Nidhi carried the tray with these savory dishes into the room and served the holy man.

“You are a wonderful cook,” the holy man said, “and I am so pleased by your kindness, I would like to grant you three wishes. Anything at all.”

Nidhi gasped, and Tarun gave a little cry of joy. At long last their dreams would come true. “Thank you!” Tarun said. “I shall let my wife have the first wish.”

Nidhi’s glance fell upon her garden, and she thought of her little cucumbers and tiny tomatoes. “I wish everything I touch would become long and large and delicious,” she said breathlessly.

“So it is done,” the holy man said, and Nidhi ran out into the garden and placed her hand upon her cucumbers. Instantly they grew longer and larger than any cucumbers she’d ever seen.

Then she touched the tomatoes, and they swelled up, so fat and ripe and red that they nearly burst.

“I wish that everything I touch would turn to gold,” cried Tarun, who had followed Nidhi into the garden.

“So it is done,” said the holy man. Tarun ran back inside and touched a broken water jug. Instantly it turned to gold.

Just at that moment their son began to cry out from his cradle. Naturally they rushed into his room to comfort him, and Nidhi reached out to lift him into her arms, but as she did, her finger brushed his little nose, and that nose began to grow, and grow and grow. “No!” Nidhi cried, but too late she understood her error, and though Tarun longed to comfort his son, he realized with horror that he could never touch his child again.

The holy man stepped forward. “Allow me,” he said, and he lifted the boy out of his cradle and held him close, so that the child stopped crying. “Now,” the holy man said, “do you have a third wish?”

“We do,” Tarun and Nidhi said together. “We wish our first two wishes to be taken away.”

“So it is done,” said the holy man. The parents, now recovered from their greed, reached out to hold their beloved child. The moment he was in their arms, his nose returned to normal, and the holy man vanished.

From that day on Tarun and Nidhi were no longer misers, for they understood they already had the most precious gift of all, a child whom they loved. They realized that friendship and generosity meant more for their child’s happiness than mere possessions.

Wondering – what do you think this story’s souvenir is?  Remember how we talked about a story’s souvenir is just that little chink of truth it tells about what it means to be human and live in this world.  Even though the story never actually happened, it can be true about living your life.  What do you think?  Yes, I think the truth of this story is what the couple realized at the end – happiness is not about what you have or getting all you wish for…happiness is about treasuring the love of your family and friends.