The Princess and the Pea:E104 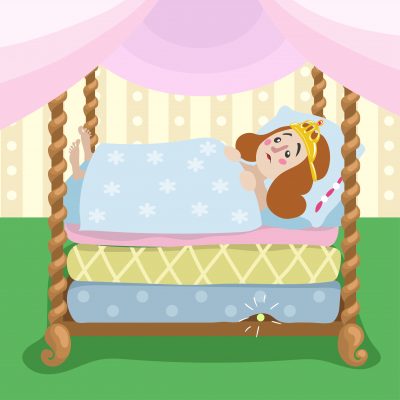 The classic fairy tale by Hans Christian Andersen (lightly adapted by Kathleen) about a Queen who devises a special test to prove whether or not a young girl who knocks on the palace door in the middle of a storm and claims to be a princess, is really of royal blood or not.  (duration – 6 minutes)

Hello everyone. I’m Kathleen Pelley, Welcome to Journey with Story.  Today’s story is about a Queen who has her own – rather unusual way of doing this.

Thanks to everyone who has been sending me your marvelous drawings inspired by the stories you hear on this podcast.  Keep them coming – send them to me on IG at JWS.

And, mums and dads, if you are enjoying this ad free podcast, it would really help us if you would subscribe, rate, and review and share it with others.

Let’s take a journey with…The Princess and the Pea.

The Princess and the Pea

Once upon a time, there was a young prince who was eager to marry, but since he was of royal blood, any wife he chose would also have to be a princess.

He rode his trusty steed all over the land far and wide, searching for a princess who could become his bride. But every time he met a princess, he always found some fault with her.

Princess Poppy was extremely picky and complained all the time about everything.

Princess Fiona was extremely melancholy and never ever smiled.

Princess Gertrude was extremely bossy and barked out orders at him all the time.

And Princess Marigold took an immediate dislike to him and sent him packing the moment she set eyes on him.

So the poor prince returned from his travels weary and heart sore with no princess to marry.

One evening in the middle of a terrible storm, as thunder shook the palace and gigantic bolts of lightning lit the sky, there was a knocking at the gate.

When the guard opened the door, he saw a poor girl – all soaking wet and shivering.

“Please, kind sir, will you let me in?”  I am Princess Felicity and I am lost.”

The guard showed the princess into the hall, and immediately awoke the royal family so they could come and meet this poor bedraggled stranger, who certainly looked nothing at all like any princess they had ever seen before.

“Was she really a princess?” thought the prince.  But at that moment he cared not one whit, for at first sight, he was completely smitten with this young girl.  But the Queen was suspicious of this stranger showing up in the middle of the night.

“I bet she is an ordinary girl just looking to marry my son so she can call herself a princess, “ she thought.  But I know exactly what to do to find out for certain if she is of royal blood.

“Why don’t you stay the night, my dear,” the queen said.

“Oh, thank you, your majesty.  How kind of you.”  At once a gaggle of handmaids whisked Felicity off to take a hot bath and change into a cozy nightgown.

Meanwhile the queen searched high and low on the pantry shelves for a hard, dried pea.  Then with the help of her footmen, she lifted the mattress of the bed, and carefully, place the solitary pea right on the bottom of the bed. Then she ordered the footmen to scour the castle for 20 mattresses that they laid upon the pea.

“What is all this kerfuffle?” asked the king in bewilderment.

“Well, my dear, we need to know if this young girl is really a princess of just pretending to be one,” said the queen.  “And it is a well known fact that only a REAL princess will be able to feel a pea through 20 mattresses.”

The next morning at breakfast the queen asked Felicity how she had slept.

At first Felicity did not want to say anything for fear of appearing rude and ungrateful, but when the queen persisted, asking her a second and then a third time, Felicity finally told her the truth.

“I never slept a wink all night long, your majesty.  I tossed and turned and could not get comfortable.  It was as if there was a rock beneath the mattresses, but of course, that is a silly thought – how could that possibly be.”

The queen beamed and clapped her hands in delight and summoned her son to come and meet his new bride – Princess Felicity.

As it turned out Princess Felicity had also taken an immediate liking to the young prince, for he was as kind and good as he was handsome.

They were married very soon after amidst great rejoicing all across the land.

As for the pea – the queen had it placed in a glass case in the palace museum and you can see it there to this very day.

Cheerio then – join me next time for JWS.