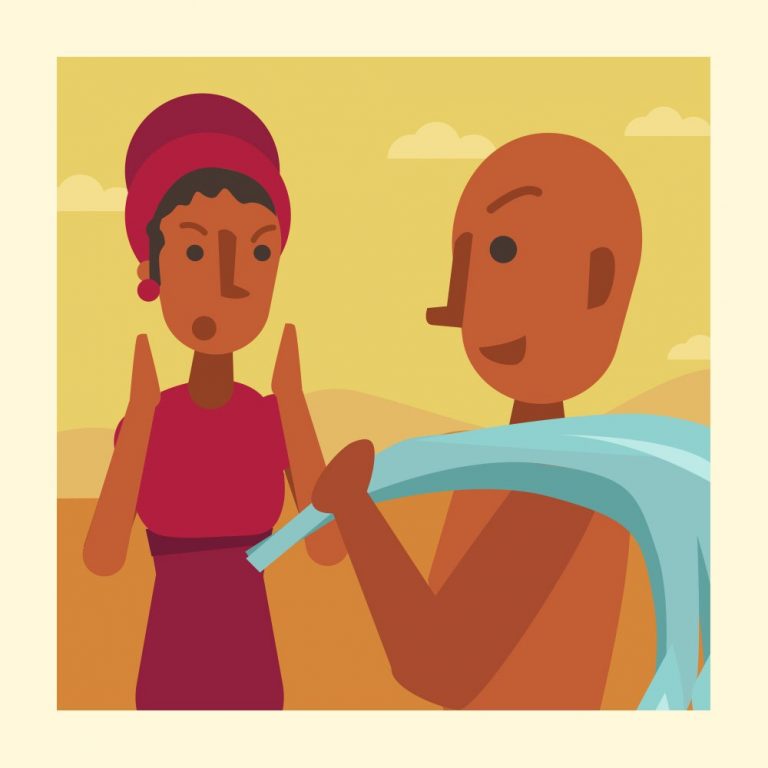 Celebrate Journey with Story’s 3rd Birthday with our Third Most Popular Episode-Storytelling Podcast for Kids-The Tale of the Linani Beast:BirthdayBonus

Let’s take a journey with….

The Tail of the Linani Beast – Folktale from Kenya

There was once a young man who fell madly in love with a beautiful young girl.  Every single day, he would march over to her house and beg her to marry him.  Now this young girl would not say yes, and she would not say no.

Instead she would say things like…”You know I am feeling soooooo thirsty for coconut water.  How I would love to have some coconut water – right now.”

And at once, the young man would jump up and say, “You want coconut water?  I will fetch you coconut water – right now.”

Then off he would run to the coconut grove, climb a tree, cut a coconut, bring it back, slice off the top and….present it to her – “Here you are – a coconut for you.”

The next day the young man would arrive at her house again.  “Please, would you marry me?”

“You want fresh fish?  I will fetch you some fresh fish – right now.”

Then that young man would race to the stream.  He would spear some fish, rush back and lay them in front of her.  “Here you are – fresh fish for your supper tonight.”

Anything at all that girl could think of to ask…that young man would provide.  But still, no matter how much he pleaded, she would not agree to marry him.

One day he asked her….”Isn’t there anything I could bring that would persuade you to marry me?  I would bring you anything – anything at all.”

The girl got a faraway look in her eyes.  “Well,  now that you mention it, there is one thing….but….I am sure you could never bring it to me….

The tail of a Linani Beast.

I have heard they are sooooo beautiful…so silky, so rare.

Ah imagine, how famous I would be if I owned such a tail.

“The Linani Beasts live deep in the forest.

The Linani Beasts crunch up humans for their dinner.”

“Yes, I know, but any man who brought me the tail of a Linani Beast would be soooooo brave,

I would have to marry him.”

Now the young man was INSPIRED.

Now he knew how to win this girl.

All he had to do was – get the tail of a Linani Beast….

And she would be HIS…at last.

He would go at once, he decided.

The Linani Beasts lived in a grove deep, deep, deep in the forest.

All day long, they slept.

But at dusk, the Linani Beasts woke up, and then….

They went a-hunting for…..bones to crunch.

Now – here is a secret about the Linanis that no one knows…..

The Linanis had learned that humans coveted their tails

So to keep humans from sneaking up on them, the Linani had developed a strange sleeping habit.

While the Linanis slept, they would keep opening and closing their eyes.

But they would really actually be sound asleep all the while,

Even when their eyes were wide open.

And that’s not all….while they slept, they would mutter under their breaths

When their eyes were closed, they would mutter, “I’m asleep.”

When their eyes were open, they would mutter, “I’m awake.”

But really, they were sleeping soundly all the time.

When the young man reached the grove of the Linani Beasts, he saw them lying in mounds all over the ground.

They seemed – at first glance – to be asleep.

But when he ventured closer he saw…

They were opening their eyes every few minutes and muttering

They only sleep for a few seconds at a time, the young man thought, How can I sneak in and cut off a Linani tail?

He sat down to watch them for a while.

He watched them for a looooooong while.

He noticed when the Linani opened their eyes,

They never looked around.

He noticed that when the Linani said, “I’m awake….

They kept right on breathing deeply as if in sleep.

I think these Linani are really sleeping the whole time, he thought

I don’t believe they wake up when they open their eyes.

He HAD to have that tail.

So he took the risk and….

He stepped over the first Linani

The Linani did not move.

“Aha, thought the young man.  I was right  – they are all sound asleep.

Now the young man tiptoes through the sleeping Linani, looking for the most beautiful tail.

There!  He spotted it!  – the tail of the chief Linani.

Long…..sleek….silky…that was the tail for his true love.

The young man pulled out his knife….that knife was so sharp…so sharp…with one quick slash – he cut that tail right off.

It was so quick. And the Linani was sleeping sooooo deeply that it did not even wake up.

The young man tiptoed out of the pile of sleeping beasts.  He began to run back through the forest with the tail

Tonight she will be mine

But he still had a long way to travel to reach his village.

Back at the grove the Linani began to wake up.

Time to go out and ….crunch some bones!

The Linani began to stretch and get up

The Linani beast laying next to the chief sat up.

He put his hand on the ground and felt something – wet and sticky.

It was blood from the chief’s tail….but…

He began to laugh

“The chief has wet his bed

The chief has wet his bed

The chief sat up and scowled.

He put his hands down on the ground.

Someone has cut off my tail!

Only a human would do such a thing like this

Whoever this man is ….today he becomes – my enemy!

A trail of blood leading into the forest.

I go to fetch my tail AND our supper, said the chief.

He picked up a handful of straw grass and tied it into a magic knot.

Holding the knot in front of him, he began to chant

And the magic knot of grass drew that young man’s voice running down the forest path, and they young man felt himself suddenly answering

That magic knot made him say that.  The young man began to call out,

I didn’t meant to do it

The women made me do it.”

The Linani stomped down the path after that young man.  The young man ran and ran and ran. Every little while the Linani would stop and call again….

And the young man would be forced to stop and call back.

Oh but…I didn’t want to do it

I didn’t want to do it

The Woman made me do it!”

The young man reached his village.

He ran to that girl’s house

Here – here is our Linain tail

NOW will you marry me?

How brave you must be!

Of course I will marry you!

“Then hide me!  The Linani is coming!

The young girl covered him with her mats – he was completely out of sight.

The Linani entered the village.  He looked around at all the houses. He is hiding in one of these huts,” he said.

Under the mats, the young man felt his voice coming out of him

The woman made me do it!

The Linani followed the sound of that voice. He pushed into that house.  There sat the girl, holding…HIS TAIL.  He didn’t see the young man anywhere.

Under the mats the young mean hld both hands over his mouth, but it was no use, still his voice came out…

He leapt to his feet and begged the Linani

The woman made me do it.

The Linani stared at that girl

The WOMAN made  you do it?”

But the man…the man…

The MAN is in charge of HIS OWN actions!”

He snatched that y young man up and he threw him over his back and marched out of that house – out of the village and into the forest… and that young man was never seen again.

Now in that village they tell the young girls.

If you love a young man…do not ask impossible things

Do NOT do that!

And to the young men they say

“if you love a young woman

Remember that the MAN is responsible for his own actions!

Join me next time for Journey with Story.