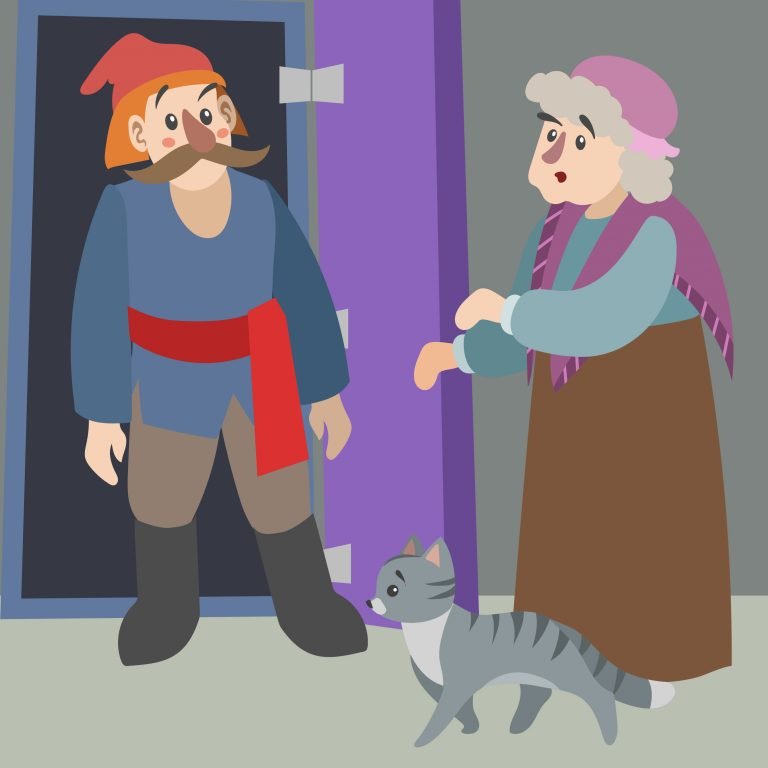 When a stingy old lady agrees to let a passing woodsman come and stay with her and her cat, Chou-chou, to help her with her household chores, she discovers that her cat can talk – or can he?

A clever tale from Quebec that teaches little ones the importance of generosity.  An episode from storytelling podcast, Journey with Story.  (duration 14 minutes)

Do you know what a ventriloquist does? Yes, he or she is someone who can speak in a way that seems to come from another person or  puppet or an animal.  Sometimes we say this person can “throw” their voice – because it is as if their voice has been thrown into the mouth of another.

Hello everyone.  I’m Kathtleen Pelley.  Welcome to Journey with Story.  Today’s episode is a tale from Quebec, which is in French speaking part of Canada – Hello to all of our listeners in Canada!  It is all about a very clever ventriloquist who uses his skills to teach a rather stingy lady to be more generous to others. Her name is Tante Odette and Tante is simply a French word meaning, Aunt.

And remember good stories, like most good things in life, are best when they are shared with others, so do take a moment please to rate, review and share this podcast with a friend or two. Thank you so much.  We really appreciate your support and encouragement.

Long ago in a village in Quebec, an old woman named Tante Odette lived with her beloved cat, Chouchou.

Tante Odette was a careful, quiet woman. She never wasted anything. A pot of soup was always boiling on her stove, and every day Tante Odette added another cup of water and a few cabbage leaves to the pot. In this way she never had to throw away the soup. Every Sunday Tante Odette baked a loaf of bread, and if by Thursday that bread was stale, she softened it by dipping it into her soup.

Chouchou was content to live on cabbage soup and crumbs.

Every evening after supper, Tante Odette sat down at her loom to weave. Chouchou lay upon the striped rug at her feet and purred contentedly.

Tante Odette smiled wistfully at Chouchou. “What a perfect companion you are, mon chat Chouchou, though sometimes I wish you could talk.”

One evening Tante Odette sat at her loom, and Chouchou was stretched out upon her rug when suddenly they heard a thumping at the door. When Tante Odette opened it, she saw a strange old man wearing a bright red sash around his waist, a red-checkered shirt, and a cap with a black feather tucked into the brim.

He bowed slightly. “Madame, I am Pierre LeBlanc, and I have come to offer you my services as a workman. I am too old to trap furs or to work in the lumber camps, and I am looking for some work in a nice, cozy home like your own.”

Tante Odette pulled her shawl close. “I don’t need any help. I’m quite able to do all my work by myself. And besides, I have my cat, Chouchou.”

She began to close the door in Pierre’s face, but he reached and held it open and looked intently at Chouchou. “Ah, yes, he looks like a wise cat. Why don’t you ask him if he thinks you ought to take me in? All I ask for my services is shelter.”

Tante Odette laughed. “Cats can’t talk,” she said, but just then, to her surprise, Chouchou began to speak.

“I can indeed talk. I simply haven’t come upon a matter serious enough to speak about until this moment. This Pierre LeBlanc looks like a good, hard worker and an honest man, Tante Odette. I think you should take him in.”

Pierre LeBlanc’s moustache quivered, and he smiled a little. Tante Odette stared at Chouchou and then at Pierre, and after a long silence she said, “Well, it is so rare for a cat to speak, I’m certain I should listen when he does.”

So she opened the door wide, and Pierre LeBlanc stepped in.

Once he was warm, he turned and looked with longing at the soup bubbling upon the stove.

Chouchou said, “Offer the man a bowl of soup. He looks hungry!”

Tante Odette was always careful not to squander, and the idea of giving away some of her precious food alarmed her. If she fed Pierre LeBlanc, the soup would not last the whole week. And so she thought for a moment or two, but at last she said, “It is rare indeed for a cat to speak, so I suppose  I must offer you a bowl.”

After Pierre had finished eating, Chouchou stared at Tante Odette. “Now give him a place to sleep. The poor fellow looks exhausted.”

This time Tante Odette was quick. She showed Pierre up to the loft, and then she lifted her beloved cat into her arms and looked into his big green eyes.

“How amazing that after all these years of silence you should begin to talk. What has come over you, dear Chouchou?”

Chouchou stared, but he refused to speak. He simply swirled his tail and curled it around his sleek golden body. Then he fell fast asleep.

Weeks passed, and in those weeks Tante Odette came to understand how wise her cat was and how sound his advice. Pierre LeBlanc worked hard and kept the place in fine order. He seemed content to sup upon the cabbage soup and stale bread. Chouchou did not say another word.

And then one night as Pierre was eating his soup, Chouchou spoke up. “Tante Odette, why do you serve only cabbage soup and stale bread? A man who works as hard as Pierre LeBlanc needs meat pies!”

Once again Tante Odette followed Chouchou’s advice, and after that, the larder was always filled with meats and sweets, chocolates and cheese, cookies and cakes.

Tante Odette seemed happier with the world, and she often looked into beloved Chouchou’s eyes. “Anything to say, my pet?” But Chouchou closed his eyes and slept contentedly. It seemed he had nothing to add.

One day while Pierre LeBlanc was away in the forest chopping wood for the fire, a stranger came galloping down the road upon a horse. He too wore a red-checkered shirt and a red sash tied around his waist and a cap with a black feather tucked into the brim. He stopped at Tante Odette’s house and knocked.

When Tante Odette opened the door, he said, “Madame, can you tell me if Pierre LeBlanc lives here?”

“That is the man,” said Tante Odette.

The stranger grinned. “And is this the Pierre LeBlanc who can throw his voice?”

Tante Odette squinted at the man. “What on earth do you mean?”

“Only a few have the gift. Only one in thousands. But the Pierre LeBlanc I seek can throw his voice behind a tree, across a room, into a box, up to the roof, so that when he speaks, it seems as if someone else is speaking.”

Tante Odette gasped again and her face flushed bright red. “I would never allow such a man inside my house. I do not like magic.”

Just then Pierre LeBlanc appeared on the path leading to Tante Odette’s, and when Pierre saw the stranger, he ran to him and they embraced.

“Ah, Pierre, I’ve looked for you all summer long,” the stranger said. “I want you to come back and hunt with me this winter,” and soon the two men were laughing and joking and talking together at the kitchen table.

Tante Odette looked at Chouchou. “Dear Chouchou, what can this man mean? I’m afraid our Pierre LeBlanc may be evil.”

Chouchou looked up at Tante Odette and winked one big green eye. “Don’t be silly, he’s a marvelous man.”

“But that stranger told me he can throw his voice.”

“Ha! I’ve never heard such foolishness. No one can do such a thing.”

She walked to Pierre’s side. “You won’t be leaving us, will you? If you stay, I can even pay you for your work from time to time.”

Pierre grinned, and when he did his moustache quivered, and he stood up and bowed low to Tante Odette and to Chouchou. “I’m happy to stay with you and Chouchou, the wise cat. And now I’ll go outside and unload the wood I have chopped. I’ll stack it neatly by the door.”

His red sash swirled as he walked outside to finish his chores, and the stranger followed him.

Chouchou lay down on his rug, winked one green eye, and fell fast asleep, and though he seldom talked after that day, they all lived happily ever after.

So, that was a fun way to encourage Tante Odette to be generous, wasn’t it?  I wonder if you could find a soft toy in your house or maybe even a hand puppet and try your hand at “throwing your voice” and make it look as if your puppet or toy is speaking?  You could have a lot of fun with that, I think.

And what about this story’s souvenir – the nugget of truth about what it means to be human and live in this world?  Yes, it is the same as many, many, many of our stories – it is always a good idea to be kind and generous and share what you have with others.

Talking about sharing – remember please take a moment to rate and review and share this podcast with others.  And do share your drawings and coloring sheets with us. Mums and Dads just post them on IG and tag us or go to our website at www.journeywithstory.com