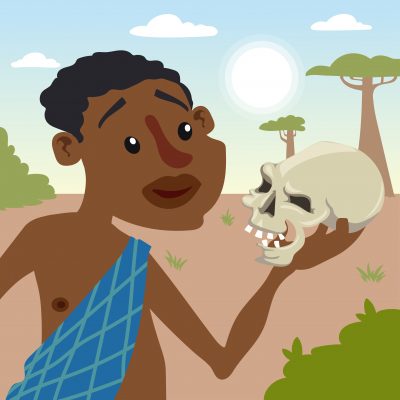 A folktale from Cameroon about a man whose habit of talking too much lands him in a heap of trouble after he finds a talking skull and tries to tell everyone in the village about his discovery.  A fun, cautionary tale for all those chatterboxes!  (duration 10 minutes) An episode from Journey with Story, a storytelling podcast for kids.

Hello everyone – I’m Kathleen Pelley – welcome to Journey with story. Today’s story is a folktale from Camaroon in Africa and it is all about a man who is indeed a kind of a chatterbox and is always talking talking talking, until one day, he learns a lesson about being so talkative all the time.

Huge thanks to all of you who continue to send me your drawings and notes and to all the grown ups who have been rating and reviewing this podcast – we really appreciate your support in growing our reach.

Beatrice for her drawing of the Little Snow Girl

Keep those drawings coming – you can see them all on our IG at JWS.

Let’s take a journey with The Talking Skull.

Once, a man was walking down the path toward his village, and he was so deep in thought, that he was quite oblivious to his surroundings. This man considered himself quite the learned fellow and he prided himself on only thinking about important things – not frivolous every day problems like other people. Unless something was complicated or difficult or challenging, then he gave no heed to it whatsoever.

All day long, this man would spend looking out over the ocean, but never noticing the beauty before him – he only thought about sharks and shipwrecks and ignored the clear blue sky, for he was too busy thinking about all the far-off storms that might be headed this way. Nor did he notice the sweet sound of birdsong, for he was too busy wondering how many of their nests had been robbed. He did not notice all the little creatures who swooped through the treetops or cavorted through the tall grass, because he was too engrossed wondering whether or not the great cats were on the prowl.

That was the kind of man he was.

So, on this particular day as he headed back to his village, the man happened to pass a pile of bones – all bleached white by the strong sun. He stopped and stared at them for a long time. After all, he was just the sort of man to do such a thing – stare at a pile of bleached bones.

Now there was a skull on the pile –stacked on top of all the other bones, and it seemed to be watching the man just as closely as he was watching it

The man reached out and picked up the skull. He held it first one way and then another. He looked very carefully and seriously into the empty eye sockets and asked, “What brought you here, brother?”

“Talking,” the skull replied without much interest.
The man was so shocked; he dropped the skull and jumped back. He watched the skull for a few

minutes before he managed to stammer “You can talk!”

“Yes,” said the skull. “Talking is very easy. All you have to do is open up your mouth and out it comes. Talking is easy. Finding something worthwhile to say is not.”

The man was astonished for he had never seen a talking skull before, let alone one that could utter such wisdom. “I must take you to the village!” the man exclaimed.

He scooped up the skull and ran as fast as he could. The villagers saw him coming, and a great many of them ran for their homes.

You see, he was the kind of man who was always wasting people’s time by getting them into useless conversations when there was still work to be done. He could never stay quiet, but was always always talking and it was never about anything anyone ever wanted to hear.

As he entered the village, he called out to his neighbors, “Come quickly! I have something wonderful to show you!” No one came.

The man was so excited that he did not even realize that the few people in sight were moving away from him. “Put down whatever you are doing, everyone! I have a marvelous1 mystery to show all of you, the likes of which you have never before seen!”

Now as soon as the man said the word “mystery,” they villagers perked up. They poked their heads out of their houses. Women left their yams cooking, men put down their spades, and children stopped their playing. They all began to gather around the man.

When he saw that he had everyone’s attention, he drew out the skull. He could not have prepared himself for what happened next.

Everyone stared at the skull for a moment. Then they all started yelling. “Mama! What is he doing?” cried a little boy.
“How dare you bring that thing here!” his mother howled, waving a spoon. “Somebody do something!” said another, clutching her child.

“Send him away!” demanded a third mother.
The men who still had gardening tools in their hands started waving them.

“Move out of the way!” yelled a man with a digging stick.

“Somebody get the chief!” said an old man holding his grandson’s hand.

Hearing all this commotion, the village chief came to see what was happening.

“What is going on?” the chief roared. He was a man who liked order and quiet and all of this yelling and shouting made him very nervous and upset.

[Everyone was silent. Finally one villager stood up and pointed to the man with the skull.“This man told us he had something to show us. Then he pulled out that awful skull. We thought he

Was trying to call the Dark Spirits to the village, and we were trying to stop him.”

“Oh,” said the chief, eyeing the man with the skull. “And were you going to call Dark Spirits to my village?”

“No, no of course not” the scholar declared, glad that the chief was there, for surely such a man of intellect would understand what he was really dong.

“Then what were you doing?” the chief asked.

“Well,” the man said, as he puffed out his chest and looked haughtily out at the crowd of villagers. “I was on my way home from the ocean when I came across a pile of bones. On top of the heap was this skull. It spoke to me! I brought it here to share this wonder with the village.”

The chief did not look impressed.

“Wait, look, I’ll show you,” the man said, raising the skull so that it looked at the chief. “Say something to the chief,” he commanded.

The skull said nothing. The chief frowned.

Still The skull remained silent. One of the children giggled. Another burst into peals of laughter.

“Speak!” said the man. “You must speak!” Now he was growing nervous.

And still the skull said nothing. The man begged and pleaded with the skull. But still the skull did not speak. The people began to get angry again, and now the chief grew angry too.

“You are always a troublemaker in my village, and now you come here with this nonsense!” The chief and the people had had enough. They took the skull from the man, found the mound of bones he had taken it from, and put it back there.

That very day the villagers held a meeting with the chief and decided to throw the man out of their village. They watched him collect his few belongings and said to him, “Since you found that skull so much company, why don’t you take it with you and you can both live together!”

Furious the man stomped out of the village and headed down the road to the pile of bones.

He picked up the skull, but before he could get one word out of his mouth, the skull said, “Sorry about that.”

“What? Now you talk! What good is that to me now! Why didn’t you say something back in the village?”

“I told you,” the skull replied. “It is easy to talk. It is not always easy to find something worthwhile to say.”

“You are absolutely unpleasant!” the man screamed. “I don’t know what trouble you caused that brought you to this sorry state, but you deserve everything you got!”

“I already told you what got me into trouble,” the skull replied. “Talking. Same as you.”

So…. what do you think the story souvenir is? that little nugget of truth about what it means to be human?

Yes, I think it has something to do with…. maybe we should always try to think before we speak and not always say the first thing that comes into our head.

I wonder – here is a great writing prompt for all o f you who like to write – can you make up a story about someone who finds him or herself in a whole pile of trouble because of the fact that they talk too much. You might even be able to make up a story based on something that really did happen

Okay…cheerio then, join me next time for JWS.