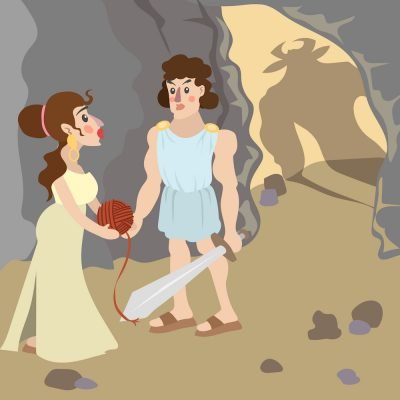 Theseus, son of the King of Athens, sets off to save the youth of Athens from the fierce Minotaur beast who lives inside a maze on the island of Crete.  A great story to introduce children to Greek mythology and celebrate a brave hero.  (Duration 9 minutes) An episode from Journey with story, a storytelling podcast for kids.

Do you know what a deal is?  Yes, it is an agreement between two people, where on person says if you do this then I will do that.  So have you ever made a deal with anyone?  Did it go the way you wanted it to?

Hello everyone, I am Kathleen Pelley.  Welcome to Journey with Story.

Today’s story is an ancient Greek myth about two deals – one deal is between two kings and the other deal is between a Prince and a princess – and let’s just say, neither of these deals works out quite the way

Oh, by the way, there is a famous monster in this story called a Minotaur –  who was thought to be half man and half bull.

Let’s take a journey with –Theseus and the Minotaur

Long, long ago, in ancient Greece, on a beautiful island called, Crete, there lived a king named Minos.  He had everything a king could possibly desire, but still, every now and then King Minos sent his navy across the sea to attack the village of Athens, plundering their land and all their possessions.

Now the King of Athens was desperate. He had to find a way to protect his land and his people.  If only he had more time, he figured he could build a strong navy – strong enough to do battle with this King Minos and keep his own people safe.

So the King of Athens offered King Minos a deal.  If Minos promised not to attack Athens for nine years, then Athens would send 7 boys and 7 girls to the island of Crete to be eaten by the terrible monster that King Minos kept as a pet – the dreaded minotaur.

The minotaur lived in the middle of a maze on the island of Crete, and King Minos doted on him, and so, when he heard of this deal from the King of Athens, he accepted it.  After all, he thought, I only send out my navy to attack them when I am bored.  I have no need of their land or possessions, and this way, I can give my beloved minotaur a special tasty treat of 7 boys and 7 girls!

So, as the years passed, Athens did build a navy, but King Minos did not attack as the king of Athens had expected. In fact, King Minos kept his word. And soon enough, it was time for Athens to keep their word and send t boys and 7 girls to their death.  The whole of Athens wept with sorrow.

Now the young Prince Theseus of Athens knew the importance of keeping your word. He knew that a deal was a deal. But, he was also quite sure that it was wrong to send innocent children to be devoured by a monster. Prince Theseus told his father , the king, that he was going to Crete as the seventh son of Athens. And he  was going to kill the Minotaur and end the terror.

“The Minotaur is a terrible monster! What makes you think you can kill it?” cried his father.

“I’ll find a way,” Theseus replied gently. “The gods will help me.”

His father begged him not to go. But the prince paid him no heed, and took his place as the seventh Athenian boy. Along with six other Athenian boys and seven Athenian girls, Prince Theseus set sail towards Crete.

When the prince and the children arrived on the island of Crete, King Minos and his daughter, the Princess Ariadne, came out to greet them. The Princess Ariadne did not say anything. But her eyes narrowed thoughtfully. Late that night, she wrote Prince Theseus a note and slipped it under his bedroom door.  It read –

I am a beautiful princess as you probably noticed the minute you set eyes on me.   I am also a very bored princess. Without my help, the Minotaur will surely gobble you up. I know a trick or two that will save your life. If I help you kill the monster, you must promise to take me away from this tiny island so that others can admire my beauty. If interested in this deal, meet me by the gate to the Labyrinth in one hour.

Prince Theseus slipped out of the palace and waited patiently by the gate. Princess Ariadne finally showed up. In her hands, she carried a sword and a ball of string.

Ariadne gave the sword and the ball of string to Prince Theseus. “Hide these inside the entrance to the maze. Tomorrow, when you and the other children from Athens enter the Labyrinth, wait until the gate is closed, then tie the string to the door. Unroll it as you move through the maze. That way, you can find your way back again. The sword, well, you know what to do with the sword,” she laughed.

Theseus thanked the princess for her kindness.

“Don’t forget, now,” she cautioned Theseus. “You must take me with you so that all the people can marvel at my beauty.”

The next morning, the Athenian children, including Prince Theseus, were shoved into the maze. The door was locked firmly behind them. Following Ariadne’s directions, Theseus tied one end of the string to the door. He told the children to stay by the door and to make sure the string stayed tied so the prince could find his way back again. The children hung on to the string tightly, as Theseus entered the maze alone.

For a long time he wound his way in and out through the maze until finally, hurtling straight toward him came….the Minotaur, but as soon as it lowered its head to charge, Theseus raised up the sword Ariadne had given him, and with one fell stroke, he slayed the ferocious monster.  Then he turned around and easily found his way back by following the string.  He knocked on the door and at once Princess Ariadne opened it and away they ran toward the ship with the children following behind.  And off they set sail back to Athens.

But along the way, they stopped for supplies on the tiny island of Naxos. Princess Ariadne insisted on coming ashore with the Prince, but there was little happening on the island and soon Ariadne lay down beneath a tree and fell asleep.  All the people gathered  around to admire the sleeping princess.

Seeing what was happening, Theseus beckoned the children of Athens to his side, and off they hurried back to the ship, and sailed away, leaving the sleeping princess surrounded by her crowd of admirers.

After all, a deal is a deal.

And how do you think King Minos felt when he learned his pet Minotaur was dead?

Don’t forget if you want to get some fun coloring sheets to accompany each of our episodes, consider becoming one of our patreon subscribers.  You can find out more on our website or on our episode notes.

Cheerio then, join me next time, for Journey with Story.