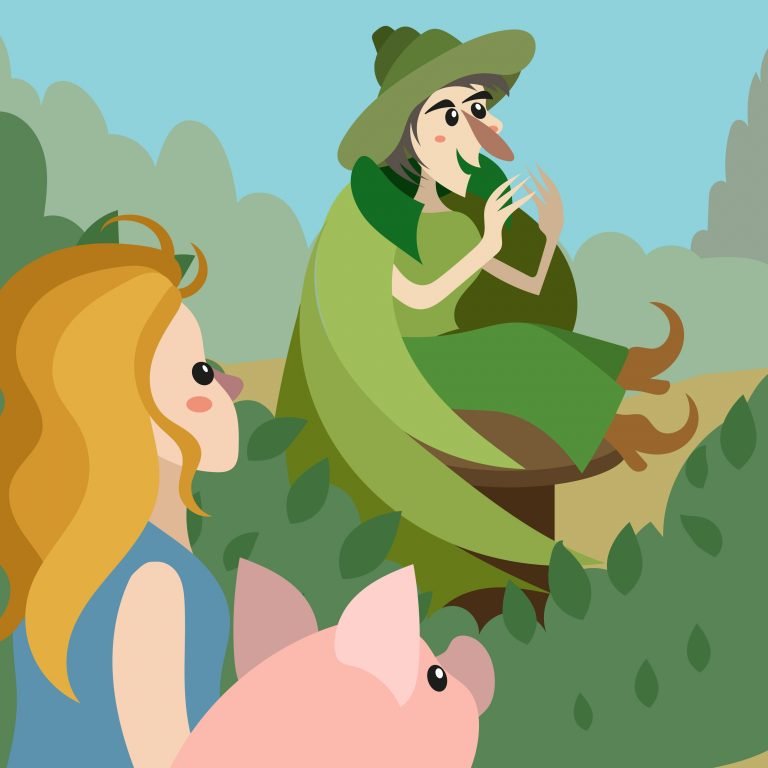 When a poor widow’s pig falls sick, she makes a bargain with a green fairy – that if she can cure her pig, she will hand over her only daughter.  But if she can guess the fairy’s name before three days, then she can keep her child.  A Scottish version of Rumpelstiltskin. (duration 20 minutes) An episode from storytelling podcast, Journey with Story, for kids ages 4-10.

If your little listener wants to ask us a question or send us a drawing inspired by one of our episodes, send it to us at instagram@journeywithstory.  Or you can contact us at www.journeywithstory.com.  We love to hear from our listeners. If you enjoy our podcast, you can rate, review, and subscribe at here Did you know Kathleen is also a children’s picture book author, you can find out more about her books at www.kathleenpelley.com

What’s In A Name? Discover the Power of Naming in this Scottish Version of Rumpelstiltskin

Do you know the story called, Rumpelstiltskin?  Can you remember what happens in that story?

Hello everyone. I’m Kathleen Pelley. Welcome to Journey with Story.  Well, if you don’t know the story of Rumpelstiltskin, then I suggest you go and listen to it here on this podcast. It is episode 56.  Then come back and listen to today’s episode, because our story today is a Scottish version of Rumpelstiltskin and it is called Whoopity Stoorie.

A huge thanks to Tova Armstrong– age 4, whose Mum sent us her lovely drawing inspired by Episode # 5 of our podcast – the King with Horse’s Ears. And thanks to Tova’s mum for her lovely note telling me that this podcast brings joy to their home every day – AWWWW. I love to hear that –because of course, that’s what good stories are meant to do – spread joy and make our hearts happy. Thanks again to Tova and her mum – this episode is dedicated to you both.

Oh, and also a huge thanks to our listeners in NZ, Saudia Arabia, Laos, Vietnam, Cambodia and  Egypt, where our podcast recently ranked in the top 3 podcasts of the  Education Category – Yeah!

Now let’s take a journey with….

Whoopitie Stoorie.  Oh, there might be a few Scottish words here that you are not familiar with, but you should be able to guess the meaning  pretty easily, I think.

Long, long ago, in a cottage high on a hill, lived a poor widow who was called, The Auld Wife of Kittlerumpit and her daughter, Kirsty.    They lived a simple life with just enough wood to put fire in the hearth and just enough milk and bread to have a meager supper of an evening.  But they did own a handsome pig by the name of Truffles, who was ready to have piglets any day now.

But one morning, when Kirsty went out to fill Truffles’ trough, she found the poor beast on its back, groaning and moaning with its trotters up in the air.

The Auld Wife and Kirsty knelt down and tried to make the poor beast more comfortable, offering her tiny sips of water and stroking her behind her ears just the way she liked, but it was no use.  Truffles grew weaker and weaker with every passing minute.  Her breaths became slow and labored and poor Kirsty and her mum feared for the worst.

Together they sat on the knocking stone outside the cottage and wept for their poor Truffles, but also for themselves – for those piglets would have given them some much needed extra money to put more food on the table and wood on the fire.

Suddenly, they noticed someone coming down the road, a strange looking body with the shape of a woman but the walk of a laddie. As she got closer the Auld Wife noticed her clothes – she was wearing a green velvet dress with a bonny crisp white apron, and on her head a big tall bonnet made of beaver. She was holding a big staff too, which really was odd.

To the Auld Wife of Kittlerumpit’s surprise, this strange woman walked right up to her and said,

‘Could you really fix my pig?’ said the Auld Wife, ‘Oh if you could, that would just be wonderful, because at the moment I feel like the most unfortunate soul on earth.’

‘Very well, I can make your pig better. But what will you give me in return?’ said the strange woman.

‘I’ll give you anything at all!’ said the wife, bowing low to the ground in a deep curtsy and ready to kiss the hem of her gown.

“No, no no!” screeched the woman, “none of your kissing and curtsying.  Let’s just wet thumbs on the bargain.”

And so Kirsty’s mother and this green lady licked thumbs and pressed them together.

Then the green lady demanded, ‘Now, let me see your pig.’

She stepped into the pigsty, looked in her bag, took out a wee bottle which contained a black liquid and shook three drops into the pig’s ears and snout.

No sooner had she finished, than the pig jumped up onto its wee trotters straight away and trotted off to the trough where she began to gobble up her food as if nothing at all had ever been amiss.

‘Thank you ever so much!’ said the Auld Wife of Kittlerumpit, ‘Now what can I give you in return for curing our darling Truffles? Food? Drink? Clothes?’

‘Oh no thank you,’ said the woman, ‘You will not find me greedy. All I ask, all I demand is – your wee lassie’

‘My lassie?’ cried the Auld Wife, ‘You cannot take her!’

‘But you said I could have anything I liked.’

‘Oh, but not my wee bairny!’ wailed the Auld Wife and she began to weep and wail, wringing her hands in despair, for now she knew, she had struck a bargain with a fairy.

‘A deal is a deal, a promise is a promise,’ said the green fairy, ‘You promised me anything so I shall take your wee bairn.’

The Auld Wife of Kittlerumpit  could barely believe her ears. What kind of person takes a bairn away from his mother? How could she save her wee lassie?    And she started to wail and weep and howl with grief and sorrow.

“Your wailing won’t help you!” said the green Fairy, “but I can tell you – by Fairy law, I cannot take your daughter until three days from now and even then I cannot take her if you manage to guess my name correctly in three tries.  But – you will never ever guess it!”

With that, off she whirled with her big staff and disappeared down the hill.

The Auld Wife of Kittlerumpit didn’t know what to do. She sat down and tried to think, but all she could do was weep.  And so she wept and wept for two days and two nights until her tears ran dry and then on the third morning, she had an idea.  She rifled through cupboards and drawers until she found a big book of names that she began to read page after page.

“Maybe Ailsa is the green Fairy’s name?” she wondered

“Or Mairi, or Poppy or Prunella?”  She kept turning page after page and so absorbed was she in her task, that she never noticed Truffles stealing out of her sty and running down the hill.

But Truffles paid no heed.  Through the forest she ran, across a stream she swam, and finally into an old quarry hole she clambered, with Kirsty close on her trail.

Then Kirsty heard  the whirring of a wheel and there before her was the strange green woman with the staff –it was the cunning fairy who had visited them for sure.  She was sitting there spinning on a huge spinning wheel.  And as she spun, she sang,

“Little does our Auld Wifie of Kittlerumpit ken

Little does our Auld Wifie of Kittlerumpit ken

Kirsty and Truffles carefully made their way out of the quarry, over the stream, and into the forest, but….suddenly, a huge green dust cloud swirled by them – it was the green fairy who whirled by them all the way to the top of the hill where the Auld Wife was still sitting on the knocking stone reading her book of names.

‘Good woman of Kittlerumpit,” she cried.  “It is time to hand over your bairn to me.  A bargain is a bargain.”

‘Could I not have a guess at your name first?’ said the wife.

‘I suppose so, but you’ll never guess it!’ said the fairy.

‘Is it Wil’o’Wisp Woman?’ asked the auld wife.

‘Not even close!’ said the fairy, ‘And that’s two tries you’ve used, only one left!’

Just as the poor wife opened her mouth to give another wild guess,  Kirsty came bounding up the hill.

“Mum, mum!” she panted.  “Don’t you know…this green lady is none other than..

The fairy turned as white as a sheet, leapt into the air and screeched with fury, as off she whirled down the hill in a green plume of rage.

Kirsty and her mum did a jig of joy.  “But where is Truffles,” asked the auld wife looking around.

“She must still be trying to follow me home,” said Kirsty and off they went in search of her.

They found her at the very bottom of the hill but she was not alone….there were three baby pigs squealing at her side.

Kirsty and her mum did another jig of joy and then they sat down to decide  what name to give Truffles three wee babies.  And when they decided on…

Snouter, Squealer, and Stubble, off they went to tell their neighbors the story of Whuppitie Stoorie, just as I have told you here!

So, do you see how this is a lot like the story of Rumpelstiltskin?  But it also has a lot of differences too, right?  Which one do you like better and why?

If you had to name some little piglets, what would you call them? Don’t forget, send us your drawings and coloring sheets on IG@journeywithstory or on our website…www.journeywithstory.com

The Talking Cat E:186 When a stingy old lady agrees to let a passing woodsman come and stay with her and her cat, Chou-chou, to help her with her household

Jabu and the Lion – A Traditional Zulu Tale  E:185 In this traditional Zulu folktale, a lion promises the kind hearted cowherd boy, Jabu, who frees him from a trap,

Encore Mother’s Day Playlist  Enjoy some of our most popular stories featuring all kinds of Mamas in this special Encore Playlist for Mother’s Day.  Includes E 18 – The Tiger’s

April Bonus Round Up

April Bonus Round Up Enjoy all of April’s episodes in our monthly playlist. Which story is your little listener’s favorite? E 182 – A Potpourri of Poems Encore episode –

The Talking Cat E:186 When a stingy old lady agrees to let a passing woodsman come and stay with her and her cat, Chou-chou, to help her with her household

Jabu and the Lion – A Traditional Zulu Tale  E:185 In this traditional Zulu folktale, a lion promises the kind hearted cowherd boy, Jabu, who frees him from a trap,

Encore Mother’s Day Playlist  Enjoy some of our most popular stories featuring all kinds of Mamas in this special Encore Playlist for Mother’s Day.  Includes E 18 – The Tiger’s

April Bonus Round Up

April Bonus Round Up Enjoy all of April’s episodes in our monthly playlist. Which story is your little listener’s favorite? E 182 – A Potpourri of Poems Encore episode –

Taffy and the Golden Harp  E:184 When three fairies, disguised as strangers come to Taffy Morgan’s house, they grant him his wish to become a marvelous musician whose harp music