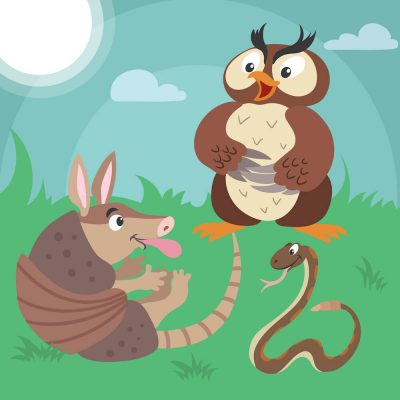 Apollo, the armadillo has a knack for making all the other animals laugh at his antics, and he even shows them that the best way to deal with an enemy is to make them laugh.  A fun folktale from South America for ages 4-8.

Do you ask a lot of questions about the world?  Maybe you want to know why the world is round, or why do tigers have stripes, or why rosebushes have thorns.  How do you find out the answers to your questions?

Hello everyone – I ‘m Kathleen Pelley.  Welcome to Journey with Story.  Today’s episode is a type of story called a pourqoi story.  Pourqoi is a French word meaning why.  Long ago, before people had computers or libraries or even books, they made up stories to explain why certain things in the world were the way they were – and so they became known as pourquoi stories.  Our episode today explains why armadillos are funny.  If you don’t know what an armadillo looks like, you might want to see if your mummy or daddy can show you a picture of one, as it will help you enjoy the story more.

Okay, did you manage to take a peek at an armadillo – they look pretty fun right? A sort of a roly-poly pig with a very hard shell, which they can curl up in.

Let’s take a journey with Why Armadillos are Funny

A long, long time ago, armadillos were not the same shy, nocturnal creatures we know today.

No, no, no, they were most definitely not.  Back then, armadillos were extremely proud of themselves and believed that the sun rose and set on their funny little faces.  Back then, they were also very friendly creatures, with no enemies at all in the animal kingdom.

Raccoons were their friends.  So were hawks and eagles and even coyotes and bears and dogs liked the armadillos.  As for cats, well that was a different matter, but we all know that is because cats are cats and they don’t really care one way or another about any other creature other than themselves.  But all the other animals enjoyed armadillos’ company.

Now one very plain and ordinary little armadillo, who lived back then was called, Apollo.  His mother was ugly, his daddy was ugly, and Apollo was even uglier than the both of them put together.  But the truth is, Armadillos are meant to be ugly – that is the way they were born to be – the uglier the better.  So Apollo was just about perfect…for an armadillo.

Apollo, Armadillo discovered just when he was a wee, little tot that he had a knack for being particularly funny.  When he bugged out his eyes and waggled his tongue, the other animals split their sides laughing at him.  The owls hooted, the iguanas giggled, and even the rattlesnakes sniggered with a hisssss hissss hisss.

One day, Apollo discovered a new trick to amuse his friends.  He hid in a ditch and waited for an animal to come a walking down the road.  The first one to come speeding along was – roadrunner.  “Beep!  Beep! Beep! Beep!”

Just as roadrunner reached Apollo’s hiding place, the little armadillo dashed out into the road, shot straight up into the air with his arms and legs splayed all out in four directions – hair standing on end, shell wobbling, eyes bugged out, and tongue a wiggle-waggling.   “Waaah” bellowed Apollo.

The roadrunner screeched to a halt.  “Arrrgh!” he yelled.  Then – karplunk – he plopped over backwards.  There he lay in a cross-eyed dizzy daze right in the middle of the road.  After a few minutes, he picked himself up, saw how silly Apollo looked and began to laugh and laugh and laugh.

The other animals, who were peeking out from the bushes, joined in.  Everyone hee-hawed and guffawed with laughter until their sides were fit to split.  Armadillo was mighty pleased and proud with himself.  His parents were proud too.  They even encouraged him more.

His daddy said, “Son, in my opinion, you could use a little more tom-foolery.  Here try these on.”  And he handed his son some funny eyeglasses with a big red nose and a hairy mustache attached.

Now when Apollo played that same jump-up trick, he looked even funnier and more ridiculous than before.   Now he was able to stop any creature, no matter his size or might, and make them laugh out loud.

Then, thunk, the bunny keeled over on his back.

Down the road came a turkey – trot trot – gobble gobble.

Then, thunk, he too plopped over on his back.

“Argh!” yelled the buffalo as he skidded to a halt and went horn over hooves.

Every single time this happened, the dazed animal would pull itself together, take one look at that clownish Apollo, and start to laugh, softly at first, but then louder and louder, until he was doubled over with great big belly laughs.  No doubt about it, that armadillo was a real clown.

But Apollo’s mother believed that good can always be better.  “Try these on for size,” she said, as she handed her son a huge floppy hat and a spotted necktie.  “Oh, yes, see how funny you look now.”

Off Apollo went to wait by the roadside.  Along came a big, fat possum.

“Argh,”cried possum. Then splat to the ground he fell.

Meanwhile up in the sky world, Lightning who was mean enough to scare night into day, was growing angry.  She was supposed to be the only one powerful enough to stop any creature in its tracks and make it keel over in shock.  This ridiculous looking armadillo, named Apollo, was stealing her thunder and she was jealous.

“Think’s he’s funny does he?  Well I am going to show that miserable little mammal a thing or two about what’s funny.”

The next time Apollo went down to hide beside the road and tickle the wits out of some poor passer-by, Lightning followed him.  She darted behind clouds, keeping herself hidden from view.  Apollo squatted in a ditch, chuckling to himself and eager to punch on the next friendly victim.

Suddenly Lightning leapt out from behind a cloud, grabbed a bolt from her quiver and struck Apollo on top of his ugly little noggin

His  eyes began to spin like tops.  He stood on his nose, then he danced on his tail.  His plates of armor clacked up and down like a set of false teeth chattering.  He rolled up into a tight ball.  Thunk, went he, then plop he fell down in a faint.

Lightning could not keep her face straight.  “Ha, ha, he got a charge out of that!”  She went back to the clouds grinning all over.

Some time later, Apollo woke up, looked around and could not see a thing.  “Help!  Where am I?  Why is it so dark?”

Then he realized he was curled up inside his own armored shell.  He stretched and pushed, but no matter how hard he tried, he could not release himself.

Fright had locked him up tight.  He tried shifting his weight back and forth, back and forth, until he began to roll.  On and on he rolled down a steep hill, hurtling so fast, he could not stop…until he smashed into a great oak tree.

Apollo’s shell split into nine places.  To this very day, you can still see those cracks on the armadillo’s back.  Out popped Apollo’s nose, then his feet, and then….

Clunk-clunk-clunkety-clunk.  Thousands of acorns rained down on his head.  Poor little armadillo.  At first he was so embarrassed, but then he leapt to his hind legs, smiled at the crowd gathered around him, and bowed  “Thank you, my friends.  Thank you.  I hope you enjoyed my little trick!”

At this all the animals began to cheer and clap.  Even Lightning could not stop from laughing.  Soon she was doubled over laughing.  And then, it dawned on her,

Apollo was taking all the credit for HER joke.  This would not do.  She reached into her quiver and fired another fierce bolt straight at him.  But all that laughing threw her aim off.  The bolt hit the ground, sparks flew, the grass sizzled, and the dirt cracked open.  And what crawled out of the ground but…earthworms.

“Yum! Yum! Time for dinner!”  Apollo grabbed a handful of those wiggly, wriggly worms and slurped them up, chewing with his mouth wide open, worms dribbling down his chin, and his eyes popping out with delight.

All the animals burst into peals of laughter.  “Look at him!  He is disgusting…. so funny!”

And then, thunk, they all fell back over laughing.

Lightning knew Apollo had won their little game of wits.  She could not get the best of him.  So she went back to her sky world and never bothered the armadillos on earth again.

And that is how Apollo, a funny little armadillo taught all the other animals something very important: sometimes the best protection from an enemy is to make the enemy laugh.